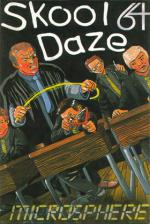 Microsphere's first release for the C64 is an attempt to evoke the best (!) days of your life in the small screen. The star of the piece is Eric, tearaway schoolboy and bad report merchant -- and a bad report is what the game is all about. Sitting innocently within the school safe is the account of Eric's achievements for the last term. Eric, being the little beggar that he is, doesn't take long to read what is written therein and discovers the news definitely isn't good. The headmaster hasn't seen the report yet (phew!) but when he does his reaction could be likened to that of a low yield nuclear device going off -- not very desirable at all! Realising the seriousness of his dilemma, Eric decides it would be best if the head didn't see his end of term report, and hits upon a plan to retrieve the incriminating documents from the school safe...

The school's security is of a high standard and the combination to the safe is very well protected -- each teacher only knows a fragment of the combination. To get the masters to spill the beans, Eric has to set the school shields, decorating the walls, flashing. The shields need a good bash to get them to flash, but some are top high to reach. Eric's only solution is to biff one of his 'friends' wandering about the place, and then clamber on the prostrate form of his chum to gain extra height -- brutal but effective. Once all the shields are flashing, Eric can knock the teachers for six and, while stars are whizzing about their heads, the extra confusion caused by the stroboscopic shields will make them tell their part of the code - except for the History master, who's memory is not what it used to be and has had to have his part of the code 'hypnotically implanted'. It can only be retrieved by finding his date of birth.

As in any school, the day is timetabled and split into breaks and lesson times. Relevant information is relayed to you via a window at the bottom of the screen and when the bell goes for a lesson, you are informed which lesson to attend and who will be taking the class. Failure to attend a lesson will incur a penalty of a few hundred lines from any teacher who finds Eric loitering in the corridors. If Eric amasses ten thousand lines or more, he's out on his ear and the game is over.

Playtime occasionally proves dangerous, as there is usually someone trying, metaphorically speaking, to drop you in it. Usually one of the lower form boys tells Eric what's going on and that Eric must prevent it happening before the end of break. Einstein, the school swot, is keen on running off to Mr Whackit and informing him of any plans. If he succeeds, Eric has to do two thousand lines. Not much fun by anybody's standards.

Eric is equipped with a number of essential weapons, though not surprisingly, the use of all of them is banned within the school. However, he can only get in trouble if caught -- any nefarious behaviour in full view of a teacher results in a couple of hundred lines The catapult is quite handy - an elastic propelled missile is quite enough to knock over both teachers and pupils. A good old fashioned punch fells the hardiest of schoolchildren and is brought into action with the H key. Unfortunately, teachers are not impressed by physical violence and punish Eric with yet more lines whenever they witness attacks.

Throughout the game a large part of the screen is taken up by a 3D view of the school, designed just like the real thing, with an assembly hall, the head's study, classrooms and other such scenery. Only a small portion of the school is shown at any lime, so when Eric moves left and right it 'scrolls'. Eric's chums wander around the school, each behaving according to the dictates of their own personality. All the standard stereotypes are included, such as Einstein the school swot, Angelface the bully, and Boy Wander - the tearaway and trouble maker. The teachers also have their own personalities, ranging from the hip and trendy Mr Withit to the decrepit Mr Creak.

This is a great little game and one which I played a lot on the Spectrum last summer. What particularly appealed to me was the multitude of actions that your character is capable of performing - punching, firing a catty, whanging teachers, etc - the attention to detail is immense. Completing the task is no mean feat and it requires a bit of thought as to how you're going to get the combination of the safe. The graphics are very similar to the Spectrum version, but they are still good - especially when you consider the amount of characters milling around the school. If you do want a really original game that is challenging and fun, then look no further than this, it's a real gem.

I really enjoyed this game. Just like the real thing, Skool Daze is really vicious. Get bored and you can wander round bashing up both pupils and teachers alike. This is great fun, especially if you've renamed the various characters present. The joy that could be derived from giving old school enemies a pixel pasting is surprisingly great. Graphically, the game is great until it tries to scroll... Though mainly monochromatic, the display is detailed and interesting. Skool Daze is quite s good game, despite its arrival on the C64 a year after its Spectrum incarnation. The idea is refreshingly original and the game is very playable. Definitely worth a look at.

Unlike Julian, I have never had the opportunity to play the Spectrum version of Skool Daze and, as it's over a year old now, I did wonder whether this conversion would prove a bit stale. However, on playing it became clear that the game's many unusual and original elements have worn well. Graphically I found Skool Daze very poor and I would have thought a bit more colour could have been injected into it. Also, I feel that the screens should have scrolled rather than 'slid', and the sound effects and music could have been better. 'Cosmetics' aside, Skool Daze is a fun game to play (and watch, in fact) due to its highly innovative nature.

Presentation 88%
Humorous, befitting instructions and many excellent touches, such as the option to rename the characters.

Graphics 59%
Characters are reasonably well animated for their size, but colour is sparse and 'scrolling' is poor.

Sound 32%
A few, weak sound effects and a short tune.

Hookability 74%
Harder to get into than the real thing, but certainly more enjoyable.

Value For Money 82%
Worth sacrificing a few school dinners for.

Overall 78%
Schooldays have never been such fun.

Schooldays have never been such fun... Humorous, befitting instructions and many excellent touches, such as the option to rename the characters.