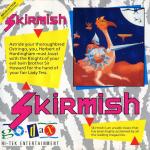 Skirmish isn't really called Skirmish. It's called Joust. In fact, the only place it's called Skirmish is on the cover art of the box. It even says Joust on the screen as the game is loading in. That's because Skirmish is an almost-perfect, non-official "conversion" of Joust, which was a two-player arcade game from Atari. As one of the big boys in the home software market, Atari was not best pleased when certain publishers started releasing "conversions" of its games for the Electron. It had already had MRM's Castle Of Gems (which was a replica of Atari's Crystal Castles) removed from the market and, perhaps fearing Atari's legal clout, many publishers steered clear of marketing such a screamingly blatant rip-off as Joust.

In retrospect, do we think it mere coincidence that this was the debut game from brand new publisher Go-Dax? Or did Go-Dax only exist to get the game on the market through a new company that, if sued, wouldn't have the money to pay? Given what came next (Kourtyard), I seriously wonder what was going on in that place...

Mind you, if this game hadn't made it to market, that would almost have been a crime in itself. Skirmish is a fabulous little game which succeeds through one of those age-old wins - ease of play. Even your old grandma can probably get her head around flying a buzzard from one platform to another and bumping into other buzzards. It's also noteable that Skirmish is one of the few Acorn Electron games that two players can play either co-operatively or competitively - you can either fly around the screen trying to bonk everything with wings on the head, or you and your mate can team up to only bonk the computer's birds into oblivion.

Handling of the buzzard is done with two keys: left and right. The only other control is Return which flaps its wings. Once. Getting the right amount of thrust behind your bird makes up about 90% of the skill of the game, and it definitely takes more than a bit of practice to get this right. The enemy buzzards are masters of angling themselves just slightly above you and dealing you a fatal blow to the head every time you let your guard down for more than a few seconds.

Rather unsportingly, when it's you who manages to bop a buzzard on its head, this doesn't actually equal an immediate defeat. The defeated buzzard, firstly, isn't dead. Instead, the rider on its back disappears and the buzzard flings an egg in one of two directions. This egg, if left unattended, will hatch into a man who will then call the buzzard back. If he achieves this and climbs back onboard its back, you're back to square one and will have to defeat him all over again.

The difficulty is that these eggs can fall into awkward places, meaning you may well find it more prudent to try and knock all the riders off first and then try and gather up all the eggs at the end. Alternatively, you may attempt to avoid getting anywhere close to a buzzard whilst you concentrate on chasing the falling egg.

If it's taking you too long to clear the screen, you also get a pterodactyl to deal with. This eerily floats around the screen, a harbinger of doom that causes instant death if collided with at any angle. And don't forget that, as levels increase, the game starts removing platforms from the screen. This means there are less places to rest your weary buzzard legs.

Whenever you're airborne you're vulnerable to attack and the flying patterns of your foes also get progressively more "human-like", as they try and keep you at arms' length... Frantically flapping your wings will often tire your birdy out very quickly, making for some quite interesting, um, "jousting" as you desperately hammer the keys to attain sufficient height. Sometimes you can also make use of the very top of the screen or an overhead platform by using them as 'buffers'. Smacking into them at high speed will rebound you at the same speed and, with a little experience, you can find this technique working wonders to despatch unwitting enemies.

There are different types of 'wave' too. Survival waves reward you with a big bonus if you manage to take out all our enemy buzzards without losing a single life. Egg waves fill the screen with eggs and require you to scoop them all up within a short time limit ,lest they hatch into men and call for their trusty birdies. Identically to the arcade machine, wave three burns away two of the platforms in real time and a fiery hand begins to attempt to pull in any bird - you or the enemy - that gets too close.

Written by the man behind Frak! and Arcadians on the Electron, Skirmish is more polished than both, which makes it definitely worth a play. I do very strongly recommend that you play with a friend though - it's much more fun that way.

The physical release of Skirmish was very unusual, featuring an obvious Amiga loading screen on its cover art. Universally loved on release for its, ahem, 'unique' game concept, it was nevertheless the playability that won over the majority of reviewers. In a typical comment, A&B opined that Skirmish was "simple to play, very addictive and a very very classic piece of programming."

Recently, it has also started becoming harder to find so, if you do want your own copy of this one, act sooner rather than later and expect to pay £5-£10.