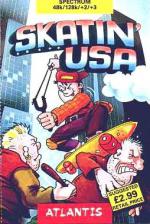 Superkid has lost all his super powers (probably too many pints the night before!). He can't fly and all his super-human strength has gone. But his quest against the evil on the streets of New York isn't finished, so he takes on the enemy using just his multi-fire, fast load catapult and trusty skateboard. Compete against the criminals in six levels of skating mania to save the city from crime!

All the graphics are small but colourful and well defined. The stages are basically made up of platforms with ramps connecting them. Skate up and down collecting dollars to light up the 'SKATIN' USA' sign and pick up food to keep yourself alive while popping criminals. This is all very difficult to begin with, and it took me ages to get into the game. Once you've sussed it all out though you get on really well and reach the bonus section where you skate a trick ramp to collect extra points.

An average tune on the title screen keeps your ears occupied plus the odd effect during play. Skatin' USA is a fun little game that will keep you playing for some time. It just takes a bit of time to get started.

A fun little game that will keep you playing for some time. It just takes a bit of time to get started.