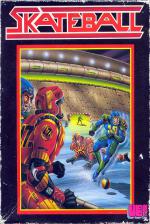 Imagine Torville and Dean crossed with the movie Rollerball and you've got a good picture of the next century's most popular sport. The game has two players per side, a goalie and an attacker, plus two substitutes each. Goals are scored by bouncing the puck past the goalie, and each round lasts until one player has scored five points. Tackling is in the time honoured Wimbledon fashion - anything goes, including flying kicks- and you should also look out for collisions with the wall, which send you flying. As the game progresses obstacles are added: initially just blocks to run around, but later on there's pits, spiked balls and disintegrators- fall foul of these and your man is dead. Lose all your men and the game's over. To avoid these obstacles when your man off screen you can use the effective radar scanner.

There's more to the game than simple violence, however, since each of your players (apart from the goalie) has different characteristics. These include strength, balance, reactions and shooting skills. Choosing the right players at the start of the game is vital for success.

They say that life in the future will be tough, Skateball goes some way to showing us just how tough. To start off with the game seems uncomplicated, but the more you play against a friend, the more demanding it becomes. Background graphics are nicely detailed, although moving sprites and sound effects both leave a little to be desired. Nevertheless Skateball is a fast, violent and addictive sports game which is well worth considering.

THE ESSENTIALS Joysticks: Kempston, Sinclair Graphics: adequate, good detailing on background Sound: no tunes, but decent in game bumping and barging effects Options: One- or two-player games, change the monochromatic background colour, practise one of the nine levels and change team names.

'This is essentially a futuristic version of ice hockey, but with even more violence. Great satisfaction can be gained from tripping your opponent, especially when he then falls into a pit. It's surprising that there's only one player to control (apart from the goalie), but this avoids control confusion and their different characteristics bring in a strategy element. It also enables a stronger player to be handicapped via weak players. The action in a two-player game is always fast, end-to-end stuff. It's a pity that on higher rounds you can simply kill off all your players, and, if more than three points in the lead, win. A bigger penalty for losing a player would add to the fun, but another flaw -the cumulative goal score is only displayed at the end - compensates since you're never certain of your score unless you carefully note down end of round points. Even so, this is one of the most enjoyable two-player games I've seen for a fair while, although it's not so hot playing against the computer.'

'At first I thought this an overly simple, run-for-the-goal-and-fire game, but after a closer look, my opinion soon changed. Picking a player for shooting skills matters little if a stronger player, or one with faster reactions, keeps bouncing you off the ball. With a stronger player the game becomes fairer - I started winning - and more enjoyable. The first levels are great fun on their own, and when the pits and spikes turn up it becomes both harder and side-splittingly funny!'

The first levels are great fun on their own, and when the pits and spikes turn up it becomes both harder and side-splittingly funny!