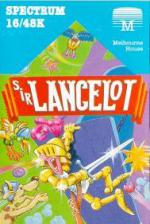 Let's not beat about the bush: Sir Lancelot is as close to Manic Miner as you can get without copyright problems.

There are 24 screens for your character to run through, collect objects and, to finish the sheet, drop into a box. While doing this, he must avoid various nasties including cooking pots on legs, pacmen and birds.

Complete all 24 and Sir Lancelot collects the Holy Grail. The screens are traditional platform-fare, though staircases ('up' only) transport the little knight from level to level and he can fall any distance.

So what's special about Sir Lancelot? Well, Melbourne House have managed to pack everything into 16K - now that's pretty amazing. Sir Lancelot himself is a far better graphics character than Willy, detailed and very endearing.

The sound is also very reasonable with a nice little bleep when an object is picked up. The game is packaged very well and there is a superbly drawn title screen with music at the start.

Sir Lancelot is not an immediately easy game to play. On the first screen it can take some time to figure out the best route to the objects to be collected. The pacman at the top moves pretty quickly and will gobble you up many a time before you get the knack of evading him.

Other screens introduce military opponents: they look a bit like Lance but they're definitely not good guys. They patrol the bottom of the screen and make it tricky to get up to the objects.

Sir Lancelot is very impressive, given that it's only in 16K. For those owners with only that much memory it's a great buy. The many more with 48K will want to think twice about buying something that's good, but not as good as Jet Set Willy.

An impressive and enjoyable arcade-adventure, especially when you consider it's been squeezed into 16K.

Although there didn't seem to be anything stunningly original about the game it had some nice touches and was difficult enough to keep me at it for quite some time.

As a 16K game, it's not bad at all, fitting in 24 rooms is quite a feat of programming, but has unfortunately necessitated a drop in the standards of graphics that Spectrum owners now take for granted. The characters move very quickly, but are flickery and not particularly detailed. If you've got 48K, don't bother with this but for unexpanded machines it's certainly the best game around.

It was inevitable that eventually someone had to squeeze Jet Set Willy into 16K.

Sir Lancelot is a fairly good implementation with a reasonable 24 rooms and some fairly tricky obstacles. There's nothing too difficult though as you've got to play against the clock and so, unlike Jet Set Willy, you don't have time to think about a strategy.

Sir Lancelot is very impressive, given that it's only in 16K.