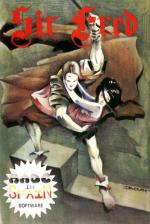 Sir Fred is a fairy tale about brave knights and damsels in distress. So to start in the way of all good fairy tales: Once upon a time there was a wise old king who ruled over a happy land. Except for one thing, the evil Hugh D'Unwyt, an evil dude who's stolen away the King's fair daughter. Since the kingdom is usually such a happy place, the bored Knights are all off on a quest for the fabled gold lame string vest. A hero is needed and the only knighted personage left in the kingdom brave (or stupid) enough to take up the quest is the aged and corpulent Sir Fred.

The princess is holed up in the Castle Feare, stronghold of D'Unwyt. When the Baron stole away the King's daughter he knew that trouble would be on its way, so his castle is extremely well guarded and near impregnable to a lonesome Knight. Undaunted by his daunting task, Sir Fred decides to try and battle his way to win the hand of his fair lady.

The way to rescue the princess and become a hero is to collect and shrewdly use certain objects. Unlike a majority of arcade adventures objects, are placed in a different place each time you play. Though mapping the game is still quite easy, placing the objects isn't. Though not random there are fifty six different permutations of the where the different items essential to your quest will appear.

Sir Fred himself is an action-packed spritette capable of many actions and looking remarkably similar to something out of a Mordillo cartoon. When you start, all Sir Fred can do is run and jump. His running style is quite a bit more realistic than Fred at full tilt down a flight of stairs, for instance, he's more than likely to end up flying head over heels down them.

Objects are picked up with the select key. Along the bottom of the screen are a number of boxes that can contain an object. A blue box highlights the window currently under your control. To use an object press the use key and the blue boxed item will come into use. On some of the weapons only a limited period of use is permitted, so a little countdown appears above the window and decrements every time the object gets used. If the counter gets to zero then the object is no longer in Sir Fred's inventory.

Different objects can add to Sir Fred's abilities. Pick a sword, and the knight is capable of being a swashbuckling swordsman if you add some neat control effort. One of the weaker weapons is the the stone that can be thrown - another good one is the bow and arrow.

What makes Sir Fred different to most of the Miner Willy's and Wally Week's of this world is his ability to interact with the background. There are pools that he can swim in, ropes to be climbed and cliffs to jumped off, all easily accomplished with up, down, left, right and fire. Action packed Fred, invulnerable he isn't. Running on a limited energy supply, Sir Fred has to try and avoid bumping into various nasties and making silly mistakes. All these silly activities are damaging to Fred's energy band, shown at the bottom of the screen. Only one energy band is supplied and if it reaches zero then the game's over. Nasties you'll encounter are of a fairly common sort: things like snakes, fish and rats, all moving along preset patterns.

The puzzles and tasks to be accomplished are of a fairly complex sort. Just like any arcade adventure nowadays Sir Fred's world is shown in flick screens, with lots of medieval-type backgrounds in this case. The more of the castle you visit, the better your end percentage. Near a hundred percent is needed to rescue the princess and what a daunting task that is.

Near a hundred percent is needed to rescue the princess... What a daunting task that is!