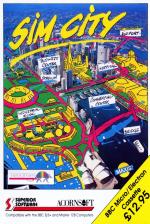 By the time the Electron version of Sim City was released, people (well, those people who still owned an Electron!) expected "big things" from the latest games. Exile had shown them a vision of what incredible things the Electron could achieve when every last spare byte was coupled up with creative endeavour, but Exile really stood alone in that regard. Sim City arrived a few years later but it was given a fairly low-key release compared to, say, Barbarian II and Predator. Indeed, this review may well be the first time a lot of you have ever even realised it even exists.

Sim City, as its name suggests, is a city-building simulator, but of a very different style to the text-based management simulators synonymous with the early days of computing. Those tended to concentrate on running an already established country (or in many cases football team) and simply keep asking the player to set budgets, allocate tax receipts or buy and sell commodities as appropriate. In Sim City, the player starts with nothing more than a randomly-generated plot of land and £20,000 in the bank. The goal? Well, ideally it's to build a fully-functioning metropolis and congratulate yourself on your great business acumen. What is more likely however, is that every year you'll find yourself spending more money than you have coming in, feverishly hoping you'll be able to turn it around before the bank balance hits zero. Like Exile, it's one of those games that never ends, except when you despair of clambering out of the hole you've dug yourself and reach for the Break key.

Originally arriving on the 16-bit computers, Sim City was, for a short time, touted as the new "breed" of computer game that was just too darned sophisticated to ever be squeezed into a puny little machine like the Electron. The reality, as is usually the case, is that it could - but compromises would have to be made to achieve it. By no means is the Electron version of Sim City as good as the original Amiga one but, considering programmer Peter Scott had less than 32K to push it all into, it's a blooming miracle... and one suspects it was only because he was such a veteran Electron programmer that he was able to achieve it at all!

Now, how best to describe the game itself. Well, firstly, you'll probably want to take a few moments to admire the blank canvas of sea and land you're initially presented with. Don't take too long however, because, in Sim City, a whole month ticks by in a few seconds and you'll want to at least set the tax rate to something higher than zero before you start investing in this new canvas and attracting some inhabitants (or "sims" to use the game's terminology) to it. Firstly, you can't build on water or on the very coasts where the land meets the sea. Secondly, you can't immediately build on all the land either - some of it needs a bit of TLC (in the form of a bulldozer) to ready it for development. Other than that though, it's just a question of choosing the type of building you want to place, handing over the cash and selecting where you want to place it - a big square with an I in it represents Industry, one wth a C Commercial (i.e. a shopping centre) and R Residental (houses and apartments for your sims to live in). No-one will move into a house, or indeed work at a factory or shopping centre, if it's not connected to the electricity supply, so your next move will be to place a generator somewhere close, but not too close, to your little community and then connect the electricity supply up to your residences by cables. As long as you haven't set the tax rate higher than 1-2% these small actions should attract the first sims to your village and result in the areas marked C, I and R beginning to change into graphics of houses, factories and shops.

You play the game by selecting an icon at the bottom of the screen - bulldozer, house, shop, etc - and you use the familiar ZX*? combination of keys to move a pointer to the element you desire. The area of the map you can see is about 1/32nd of the whole canvas and the cursor keys allow you to scroll it around. (User-friendly, yes, although on a real Electron, the Break key is next to cursor right so you need to be careful not to knock it and lose all your hard work!) Once you select an element, the pointer will change appropriately when you return to the playing area - bulldozing an area is done with a small 8 x 8 cursor; placing a residential area is 24 x 24. Power stations, harbours, stadiums and airports - once your city is profitable enough to justify the costs of building them - are even bigger.

What makes Sim City truly magical is all the hidden formulas under the hood that determine the effects of your actions. You'll need to link all your buildings with roads so the sims can commute back and forth, but maintaining roads will cost money - so building a scenic coastal road for aesthetic reasons is a seriously bad idea. Likewise, if you want to maintain law and order, you'll need some police departments. But, as soon as they are built, there will be a bill for policing landing on your doormat each year. The same for a fire department. If you raise taxes too high in order to pay for these services then you'll see sims starting to leave, and those built-up houses and districts will return to bald R, I and C squares again. So perhaps you'll decide to deal with it by giving those bothersome police, fire and transport workers less than what they ask for. But a lot less or just a bit less? The choice is yours.

One seriously impressive feature of the Electron version that absolutely must be singled out above all else is the speed at which it all runs. With all the myriad calculations the machine is performing in response to each decision you make, you might actually have been able to forgive it being a bit slow on the uptake. However, it all zips along in fine style; my only real criticism is on the budget allocation screens at the end of each year. It is a tedious process having to move the pointer over the plus and minus controls and tediously tap the Return key many, many times to adjust budgets each year.

Finally, the graphics and aesthetic feel of the game are thoroughly modern - the miniature trees, railways and roadways, and the way these last two intuitively curve and straighten as you lay them out, are particularly good.

All in all, a brilliant game. Compilations aside, this was Superior's very last release for the Electron and, consequently, it's almost impossible to find this for sale anywhere now. It easily deserved the same big box treatment as Exile and Repton Infinity but it arrived so late to market that, despite near-universal praise, it sold only a handful of copies. The Micro User, in reviewing the BBC version, considered it not only "a major triumph" but "a superb educational package in its own right" so, considering the tape is a 'flippy', with the BBC version on one side and the Electron version on the other, many Sim City copies will likely now be adorning BBC collectors' shelves rather than Electron collectors' ones. If you've got it, consider it a major investment; if you're looking for it, be prepared to spend at least £30. It's well worth it because, after Exile, it is quite probably the second most marvellous program ever produced for either machine.