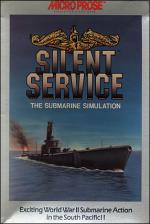 Silent Service is the latest from simulation supremos, Microprose, and features the tense action of life as US submarine captain in the second world war. Your mission is to sink as many Japanese ships as possible without putting your own sub at risk.

Obviously commanding a submarine takes a little getting used to, so the game allows you to gradually build and practise with target runs and small scenarios before you go on patrol. However, even when you've achieved the giddy heights of full patrol status you can still 'add interest' to the game by including, what are described as reality levels to make things even harder. These include limited visibility, expert destroyers and even dud torpedoes. Unfortunately, it will take several hours and many sunk submarines before you are ready for that challenge.

Your first job is to get to know the parts of the submarine and how to use them.

You begin the game in the conning tower from which you can move by joystick to the bridge, operate the periscope, consult the maps and charts, inspect damage reports and control various instruments and gauges that steer the sub.

Each area is represented by superb graphics that add tremendously to the game and soon you'll be charging around the sub plotting your route, to steer your sub into battle. Once in contact with an enemy convoy the action really begins.

First you have to decide how to approach the convoy. For example, do you steam straight in, blasting torpedoes as you go or do you stalk it until you can catch the convoy's escort out of position and then strike; sometimes it's best to completely circle the convoy and intercept it further along its route. Sensibly the simulation allows you to speed up time so you're not bored silly by the time you finally get into position.

Your zero in on your targets either using the periscope (at periscope depth - 44km) or with binoculars on the bridge, then it's up to you when and how to attack. Depending on the scenario you pick you may have working torpedo tubes fore and aft as well as powerful deck gun but the enemy are also well armed so you should always be prepared to dive, dive, dive!

The submarine's nightmare appears in the shape of a destroyer which can not only outgun you on the surface but also make life very difficult by dropping depth charges on you. How you deal with this threat is entirely up to you. Sometimes it's best to attack the convoy on their 'blind side' then run for cover before they spot you; other times you have no alternative but to attack.

At the end of each mission you are rated on your performance and beckoned into even more dangerous missions.