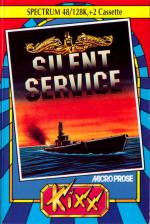 When boats were invented many moons ago, the whole idea was to have something that floated on water, thus keeping you dry and providing a safer alternative to swimming. This idea was widely accepted until one day Mr. Submarine decided to come along and confuse everyone by inventing a type of boat that sank.

These vessels were very successful and thus Mr. Submarine is now probably a very rich man who resides in a mansion somewhere in Jamaica and spends his days sipping at glasses of Americano and organising his next appointment with his private beautician.

This is what I call a simulator! I can't fault it. You play the captain of a WWII sub posted in the South Pacific, your mission being to seek out, track and sink Japanese vessels! It really is THE definitive submarine simulator. There are so many controls and options, including skill, reality and difficulty levels, location, submarine and combat controls.

The thing about sims with this level of reality is that they won't appeal to everyone. There is just so much to remember, that I think the only people who will completely master silent service are die-hard simulator or naval fanatics and actual submarine pilots. There is just so much packed into this piece of software that you soon begin to notice your Speccy going all dizzy and weak at the knees with its vast size - thus the game moves very slowly and screen updating is particularly sluggish.

Silent Service might not score much graphic and sound wise, but then what do you expect from your humble chum?! Playability and testability only come into play if you can really get into this game. If you take one look at it and decide that it's just too complicated to bother about then obviously neither of these will count for you.

All I can say is, if you manage to reach in and grasp this game by the small intestines, you won't regret it. As it stands, this has to be one of the most accurate sims available (after all, this comes from the bods who created Gunship and Carrier Command).

This is a REAL simulator, with more controls than a NASA Space Shuttle. It's very complex, so only buy it if you intend to really get down to it.