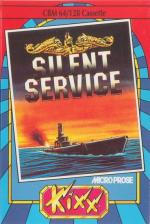 The South Pacific, 1943... Captain Hojii of the Japanese frigate Taisho casts his gaze across the clear blue sea. Not an enemy aircraft in sight, but if the convoy doesn't make it, Japanese factories will go desperately short of raw materials. For him, success is not just a military priority, it's also a sacred duty.

Suddenly, an ear-shattering crack splits the air. The Taisho lurches violently, sending Hojii sprawling across the deck through a hail of sea water and debris he can just make out the wreckage of a cargo ship, drowning sailors desperately clinging to splintered crates. Suddenly the truth dawns... while zealously watching for enemy aircraft, he'd neglected the threat from below - the mighty leviathan that is destroying his command slowly slides beneath the waves [That's enough atmospheric scene-setting, thanks - Ed].

In the mid-1980s MicroProse built up a reputation for really great war sims. Combining historical accuracy with crystal-clear presentation, these were the wargamer's wargames: fast, accurate, and above all playable. Silent Service is no exception.

You play the role of an American submarine Captain patrolling the South Pacific. Your task is to scour the cruel seas for Japanese supply ships, starving her industry of raw materials and bringing her war machine to a grinding halt.

Three types of scenario are on offer: 'Torpedo/gun practice' sees you popping away at old cargo ships with dummy torpedoes. When you think you're up to it, try plastering some genuine Jap tubs with 'Convoy actions', a limited but enjoyable battle scenario. Best of all are 'War patrols', in which you stile from one of three Allied bases and take on a series of convoy actions. Each scenario is sub-divided into several campaigns, each recreating a different aspect of submarine warfare.

It's games like this that really highlight the need for mid-priced budget releases. Originally reviewed in Issue 13 (88%, no less!), the reviewer commented that, "The instruction booklet is a [fifty page] work of art" and went on to congratulate the author on his detailed historical research and attention to detail. But what do our budget buddies get?! One poxy sheet of A4! Don't get me wrong, the game is so well laid out and easy to use, you'll manage very well with just that - but when the design team spent so much time researching the game and putting it into its historical perspective, it seems a pity to short-change them with the cheapo release.

Silent Service is a peach of a game. Combining all the complexities of a strategy sim with the playability of an arcade game, you'll be playing it for months. Grab yourself a book on naval warfare while you're at it, your gaming will be so much the better for it.