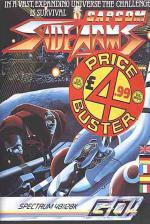 What is a plot? A plot is a background, a storyline. Does it enhance the game it belongs to, does it help you to play the game any better? No, it makes no difference to the game at all, so why should I bother telling the plot to you. After all the plot of the Arcade version of Side Arms had almost no effect on its Spectrum conversion.

For those of you who didn't know, Side Arms was a spiffing Arcade game. The Spectrum edition is not an ordinary conversion, but an almost completely inaccurate one. Groans will be emitted, readers will try to get rid of me when they see the high rating at the bottom of the page yet I say, it's brill. Though it may bear little resemblance to its arcade predecessor it is still a great game in its own right and that is how I will judge it. (Quell shock Tony - G.T.)

Viewed from the side, you play a robotty chappy who has to fly left to right generally shooting anything that creeps menacingly into view. A frustrating point for all Zynaps/Defender players: The nasties come from behind you as well, so you'll have to drop that cowardly tactic of staying in the leftmost half of the screen.

Your large robotty person can turn to shoot these spots on the orifice of nastykind, but you must beware the nasties coming from both directions at once. You start with a puny little 'one shot at a time' gun which is generally useless, but do not be disheartened. Upgrades are right around the next screen which make your weapons seriously better. Certain aliens leave little pods when they get shot (I think we might leave little pads if we got shot mightn't we readers) which can be transformed into various other things simply by shooting them.

Once you have collected a weapon, you can switch between that and any other weapons you may have collected. All of the weapons are useful, depending on the situation you are in. The 3 way is useful when there are a lot of nasties on screen, as it clears them quite quickly though is not very precise. The Auto laser is of particular good use in the second level when little snake like chains follow you around the screen and need a to be shot a multitude of times in the head before they die. The other weapons are also needed in various areas, but I'll leave that for you to find out what you need where.

Upon starting, the graphics do not promise much, but play on. The graphics are well defined, and are a little lacking in details but when you reach the end of a level really come into its own. Huge end of level guardians do their stuff, be it bouncing up and down or spinning around. The guardians are very, very well designed and well animated but they do tend to die very easily.

The game is very easy in some places, though in others it's frustratingly hard. It has been put together in such a way that you get amazingly far in a few goes and then die and believe me, it gives a great sense of 'just one more go'. Buy it.

Fans of the coin-op may be disappointed, but just think of it as an original game.

Highly entertaining mass destruction game that, though it bears little to the arcade game, is still good in its own right.

Highly entertaining mass destruction game that, though it bears little to the arcade game, is still good in its own right.