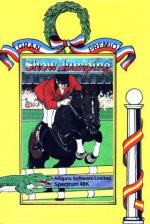 Show Jumping has never been one of my favourite sports so why do I keep going back to this game for one more go? After all it's infuriating.

The game can be played either on your own or in competition with seven others.

The solo game also doubles as a practice mode but is still challenging as you have to complete eight different courses that get increasingly more difficult. This you have to do within the 100-second time limit and without scoring more than twenty faults.

Controlling the horse is achieved, in theory, by joystick or redefinable keyboard and can be moved in any of twelve directions around the scrolling course. A plan of the course is displayed on the screen before you start, so you can work out the order that the fences should be taken in but then you're on your own.

In the multi-player option each contestant selects a horse which just happens to be named after an Alligata game (e.g. Who Dares Wins II, Ark Pandora and so on) and has one chance to get round a randomly selected course. Any ties are settled by a jump off against the clock.

The graphics are excellent as the horse bounds around the course knocking bricks out of walls and fences flying and there's a passable rendition of the BBC showjumping theme before the game begins.

This is definitely the game to play instead of watching the Horse of the Year show.

The graphics are excellent as the horse bounds around the course knocking bricks out of walls and fences flying and there's a passable rendition of the BBC showjumping theme before the game begins.