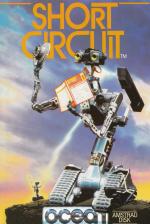 Short Circuit, both the game and the film, concerns a nuclear weapons transportation robot that gets hit by a bolt of lightning. This makes the robot sentient, i.e. self aware. The chase is then on for the authorities to catch him.

The scientist who made him wants to take him apart to find out what has happened. The President of Nova Robotics (the manufacturer) wants to capture him before the weapons he is carrying kill millions of people, and the security chief wants to blow him up so that he can get home in time for dinner!

The game is in two parts, each individually loaded. Though your score is carried over from one to the other to make a composite game at the end, each game is actually playable separately. The first game is one of the now familiar 3D maze games that are proliferating on the Amstrad at present. The main ddifference with this game is that the view is not isometric, i.e. viewed from a corner of a room but a more direct one square on to the room. This works very well as there isn't the usual control confusion and it is the one original feature of the game. It allows three walls to be shown rather than the two so there is more detail than usual.

The only problem... is that all the furnishings in the rooms look identical! All the desks look the same, all the potted plants look the same, all the filing cabinets are of one design and all the coat stands have the same coats on them! This is a reasonable technique for saving memory I guess, but when you have two desks and two bookcases and a wall full of filing cabinets in every room, things do start to get a bit tedious.

The idea is to find your way around the Nova complex. This is the factory where the robot was built. You have to find objects and solve puzzles. There are also programs you can run. You can only hold three of these in memory at any one time, though you can freely change the three that you have. You start off with only the Link program. This allows you to hook yourself up with computers lying around in various offices and download software in their memories.

Other programs, like search, allow you to examine objects in rooms to find out if they contain anything of significance. Other programs - like laser, are needed for the next stage of the game. Constructing an artificial robot to act as a decoy is the main aim of the game, however.

The second stage of the game is a cut-down version of BBC fave Stryker's Run. You move across a scrolling 2D background with animals coming at you from one direction - jump over them for points - and enemy soldiers and robots from the other. All this, as well as having to jump over puddles, streams and boulders as well, would be comical if it wasn't so awful. Even shooting the guards only paralyses them and makes their trousers fall down!

The first game is low quality... The second one is dreadful. This would struggle even as a budget title. At full price, Ocean, it's the pits.