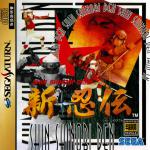 Joe first got into the ninja scene when he spotted a stall at a summer fayre, promoting the East Grimstead Martial Arts Re-Enactment Society. The club promised fun days out recreating great Asian battles of the past; in reality, it was a bunch of fat home counties Grant Mitchell-lookalikes in pyjamas hoping to break a few arms.

But Joe had private medical insurance and soon he was wielding a sword with the skill of a skilled swordsman. He even moved to Japan, wore a hankie in front of his face and got a good-looking bird, all in the pursuit of the ninja lifestyle.

But what he needed was a quest, like they had in Kung Fu, his fave cable show. So when he got a video through the post with some guys in Whigfield masks holding his girl captive and threatening to disembowel her with chopsticks, he was overjoyed. Now he could prove himself. He would no longer be some ordinary Joe. Now he was Super Shinobi!

Travel through the platform levels, slashing ninjas and using the inscrutable Mushahi magic.

With many games steering clear of controversial violence, it's nice/awful depending on your opinion to see the gory bits that accompany the massacring of the enemy in Shinobi. Various bloody effects, including bodies slashed in two and bloody fountains erupting out of abdomens leaves nothing to the imagination when your adversaries go under the knife.

Joe is, in a word, a supple kind of guy. He leaps about like a man who has no thoughts about having children, and doesn't carry scissors pointing downward. Au contraire, he carries a big sword, threateningly, and in the following manner:

Joe learned the power of unseen forces from a young age, and is now so good at the cryptic arts he can summon demons and alter himself at a moment's notice. That is, if he has the right talisman:

Your saga takes you from midnight Japan to... well, who the hell knows? Basically, it takes you to most of those places that look good in most platform games - abandoned factories, disused mines with fully-functioning railway systems, seedy lairs. Just like an episode of The Sweeney, in fact. You may scoff, but witness the large steel mesh fences for throwing "suspects" against.

A little bit of vandalism reaps rewards in Shinobi as some power-ups are lurking in the background. There are lams to break, screens to slash and a good bit where you bring the bamboo down.

I must admit my impressions of Shinobi weren't very complimentary. The graphics, although marvellous in their photo-realistic glory, demonstrate none of the slickness and animation you'd expect from a Saturn game.

But once you get into the actual gameplay, the rough edges soon become forgotten, as you realise this is classic Shinobi action. Not a bad effort, but I can't wait to see what the future holds in store.

Joe Musashi is the first stalwart from Sega's glorious past to bolster the Saturn line-up. His entrance is not too flashy and none too original. To all intents and purposes, it's platformer of the old school.

But as old school goes, this is an old Etonian. The graphics are, by and large, very tasty. Crisp, solid and lovely sprites created from digitised actors. Sega have thoughtfully added some red ketchup to give the action a bit of grit.

The music comes across well in many parts, adding a movie atmosphere that the flat graphics lack a bit. But it's gameplay that makes this one of the most recommendable Saturn releases. It's both tough and varied, with lots of ninja moves to employ.

Having a platform game is compulsory and this is streets ahead of Clocky Knight and Astal, the only other options. All I can say is "Well done, Joe".

Graphics 88%
P. Excellent sprites and the nine stages of backdrops are well realised.
N. The video intermissions are dark and dull.

Music 85%
P. Ranges from good to very nice, with level four being a particular highlight.

Effects 78%
P. During play the effects are alright, but those in the video intro are hilarious.

Lastability 82%
P. Many of the levels and bosses can be patterened.
N. Harder than Clockwork Knight and Astal by some way.

Overall 85%
The best platformer on the Saturn so far, but it's early days.

The best platformer on the Saturn so far... Long levels, more than a few tricky scrapes, fast action and good character control.