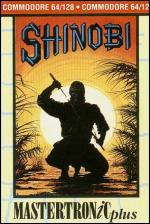 It's strange to reflect that what was once the UK's biggest budget house has now been reduced to re-releasing a handful of games, all from Virgin Games which bought the company several years ago. What's more, that massive budget back catalogue has been frozen, with cover-mounts ruled out, increasingly distributing Sega consoles has come to dominate the company, so much so Sega is currently negotiating to buy the company!

It's appropriate then, that one of their best C64 bestsellers of recent years was a conversion of Sega's Shinobi coin-op machine. As in the sequel, Shadow Dancer, despite the Ninja theme there is no hand-to-hand combat - it's all to do with throwing shuriken, of which you have an unlimited supply. The idea is to fight your way through two horizontally-scrolling levels packed with Ninjas, then beat a mega-monster to get a bonus level. In this you move a shuriken-throwing hand left and right to take out oncoming Ninjas in a neat, first-perspective sub-game. All this is crammed into a single multi-load, with five levels in all.

In Issue 54, Shinobi won 86% with enthusiastic praise from Robin, who hadn't thought much of the coin-op, but "the C64 game is, by contrast, superbly presented and highly playable. The skill level is set just right and the end-of-level opponents are some of the best I've seen". Randy was even more enthusiastic, slipping in that fatal arcade-perfect cliche with "it's so authentic, at times I believed I was playing the arcade machine!"

It's not quite that good: very few, if any games truly deserve that cliche (even on the Amiga or Megadrive), but it is a superb conversion by Steve Snake. Two levels and a bonus game in a single load is impressive stuff, while the sprites are nicely done - no sprite overlays are used, which usually means a blocky look, but in fact the graphic artist has made them work very well.

Gameplay is tough - a single bullet or two punches kill, sending you back to the start of a level - but that's coin-op authenticity for you. The most serious flaw is that it's already been available for quite some time on the second edition of Fists Of Fury which most Ninja fans will already have.

An excellent conversion. The skill level is set just right and the end-of-level opponents are some of the best I've seen.