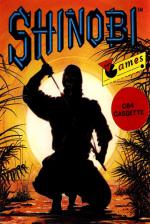 Ying tong tiddle-eye-po! It's always the same, isn't it? - go out for a quiet, relaxing stroll through the city streets with yer gal, and some oriental gang crawls out of the woodwork, beats you up and runs off with said female companion. Such is the storyline for the first arcade conversion to appear on the relaunched Virgin Games label.

You play the ominous role of a shuriken-wielding but generally charming kinda guy, obviously somewhat upset by the loss of your girlfriend. And what else would a chivalrous dude like yourself do but set out to find her. What follows is screen after screen of out-and-out arcade action taken from the hit Sega coin-op.

You must walk along a horizontally-scrolling street, wiping out the bad guys and collecting new weapons when available. But wait! Yours is not the only pal who has been abducted! For, on each level, are a number of other hostages who require assistance. Most of these are guarded by a booma-sword-wielding fat baddie, who will do his level best to catch you unawares and lop off your vitals when his sword swings back to him.

After every second level you are greeted with the awesome sight of an enormous end-of-stage monster which, after many hits to his most vulnerable bodily area (which you're left to find for yourself) opens the gate to the next street - but not before you are given the chance to tackle a bonus stage; your arm is shown at the bottom of a first-person perspective 3D screen, onto which leap ninja attackers. Take them out with your shurikens before they jump across the three wooden bridges and reach you.

I recall with fond memories standing in the arcade up home, pouring obscene amounts of 10ps into the local Shinobi machine - I still do at odd times. So imagine my delight when this conversion appeared on my desk, begging me to load it up.

And you know, I'm glad I did, for C64 Shinobi is an extremely faithful representation of the original. Every aspect of the game has been packed into the C64 without losing any of its polish - even the sound effects bear a strong resemblance to their coin-op counterparts, and just wait until you see the bonus stage - it's so authentic, at times I believed I was playing the arcade machine!

I was pleasantly surprised when Shinobi came in because I hadn't thought must of the original coin-op. The C64 game, by contrast, is superbly presented and highly playable.

The skill level is set just right and the end-of-level opponents are some of the best I've seen in a long while.

In fact, the game is extremely well polished, with Virgin combining good colours with fine graphic detail. My only reservation is that, like the coin-op, there might not be that much variety - although the bonus section is very good.

In short, an excellent conversion.

Lastability 84%
Good use of multi-load provides lots of enemies to bash with tough end-of-level monsters.

Overall 86%
A very accurate coin-op conversion with plenty of playability.

A very accurate coin-op conversion with plenty of playability.