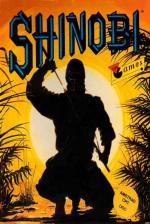 Shinobi: oriental magic and myth surrounds his clan, who have been perfecting the martial arts since time immemorial. Now his fighting skills are to be employed by the forces of justice. The children of the world's leaders have been kidnapped by a group of nasty ninja terrorists called the Ring of Five, and it's Shinobi's task to save them.

The trail to their hideout is going to be tough and more than a little dangerous, as anyone who played the demo on AA's cover tape last month will know. This doesn't worry someone of Shinobi's pedigree, though, because he's had plenty of practice for this very mission in arcades all over the world. But now it's time for the main event. And you're in control!

Leaping tall buildings in a single bound is Shinobi's speciality. Armed with an unlimited supply of shurikens and the occasional dart he vaults his way through a variety of platform locales: office blocks, docklands and woodland among them.

The Ring of Five, a group of "super ninjas" and their camp followers (if you see what I mean), are a mixed bunch. Most of their boys are just street thugs dressed like punky bikers - easy prey: a quick kick in the groin and it's domino time. Littered about the place, though, are master ninjas - fat red ones with shields - who don't go a whole bundle on a throwing star in the earhole, and are much harder to knock over. Sundry other problems force themselves into the frame: spidermen, camouflage ninjas, divers with scuba gear and katanas... not that they ruffle our boy in the green pjs though. When he starts to rock, it's magic, pure magic.

Now there had to be a point to spending countless years sat on the side of Mount Fuji in meditation [I thought it was in Japan? - Ed], and the point is this: when the going gets tough, the tough clasp their hands together and call in a spirit-guided air strike. Shinobi can summon his warrior ancestors to come and lash his current foes, and warrior ancestors come in very handy when you're facing the big nasty at the end of each level. But (there just had to be a but!) there's a strict limit to the magic you have available, so be cautious and use it only in extreme difficulty, not just when you panic.

Controlling Shinobi is no trouble, because he has very limited fighting moves. This is no great loss, however, since despite appearances Shinobi isn't really a fighting game. The way to win is to be in the right place, with the right weapon at the right time. Slaughter is not of the highest priority. Rescuing the hostages should be your primary concern, followed closely by staying in one piece.

Hostages bring points and power, because when you save one of the little darlings on each level you get a dart throwing gift. Even the guys with the shields fade into obscurity if hit one of them with the thrown equivalent of the Colt Python. If you die, though, the power is lost so stay frosty and the levels start to fall.

There are enough sticky points to plague you for weeks after you've progressed beyond that particular section. Russian roulette would be a safer option than taking on that helicopter again. Gameplay is the bedrock that Shinobi is built on, and the foundations are solid indeed. All you can really do is throw and kick to kill people, but it's the timing that's important. It seems that being a ninja master, like being a good comedian, depends more on delivery than material. That must be the case, otherwise how could you kill an 18 foot lizard with tiny tin stars?

Arcade accuracy in Shinobi is phenomenally helpful in maintaining interest, especially with the recreation of the the target range bonus sections. Ninjas appear en masse in the far distance and your hands are shown flicking deadly throwing stars off at them. They leap into the air and start to work their way forward, intent on doing you down. On the demo version of the first level this section wasn't that tough, but things have a way of changing. To get an extra player on later levels, killing every ninja requires a cool head and quick threat identification.

It's a multi-load, but that shouldn't be a major disadvantage. Each level is worth reaching, and with the game's breakdown into small but tough sections, it doesn't take too long for you to get into the action. Green screeners might be frustrated by some of the stage backgrounds which occasionally use colours that have little contrast on a mono screen (green and red). This, however, is to make full use of the CPC's colour potential, and any attempt to maximise the CPC's ability must be applauded. With over 30 people to croak in three minutes if you're to get through the first level, the pace is fast and furious, with difficult terrain thrown in for good measure.

Thing is, for all the punishment he can dish out Shinobi's a real wimp; one blow and he's down and when he sets off the magic there's not that blood curdling "Shuriaaaaaaah!" Shinobi is a brilliant conversion that makes life just a little easier and cheaper than standing for hours in dark and dingy arcades filled with smoke and other bloodthirsty people like yourself.

Now this is what I call fighting! There's loads of stuff to do, and I doubt you'll be complaining about lack of value for money. There hasn't been a better fighting game all year!

Grab Factor 91% P. The right mix of difficulty and playability.

With over 30 people to croak in three minutes if you're to get through the first level, the pace is fast and furious, with difficult terrain thrown in for good measure.