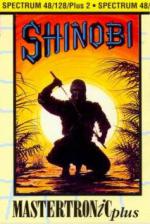 Ninjas again?! Yep, but this time it's Ninja Magic! And you're a young Ninja type called Joe Musashi who's invited back to his Ninja school as special guest at the annual graduation ceremony.

Having bored everyone stiff with your speech, you are just about to hand out the prizes when in a puff of smoke Bwah Foo appears!

Who? Well, like yourself he's an illustrious graduate of the Ninja school, but has turned to the Dark Ways. And before you know it, Bwah zapps you with a holding magic spell! He then makes off with all the young graduates to hold for ransom. The ultimatum is simple: pay up all the dosh in the school, or it's curtains for the kids!

When the magic wears off you know it's your duty to save them.

Strapping on your sharp sword and picking up a plentiful supply of shiriken stars, you trail Bwah to his lair. Five mission, each split into three or four stages stand between you and the final confrontation with Bwah. The danger element is provided by hordes of his henchmen, some armed with shiriken, some with swords, and the occasional gunslinger.

As you battle through each section, you find children sitting on the ground: walk up to them, and your Ninja Magic will transport them back to their parents. Virtue is well rewarded with bonus weapons for rescued kids. Weapons are limited, so don't run out of them at the wrong time.

You do have your Ninja Magic, one blast per level, which like a smart bomb knocks out all adversaries on screen, but it is best saved for end of level big fatties. They're tough, and even the magic blast does not kill them outright. But it helps.

Bonus screens appear at the end of completed levels, with your hands in the foreground. Lob sharp shiriken stars at evil Ninjas for extra points as they zip 'shooting gallery' style across the screen.

The main sprite didn't impress me a great deal, he looks and moves more like a lame Bruce Lee than a dashing Ninja. But ignoring the slightly ludicrous hero the game is really rather good, with an oriental soundtrack that plays throughout and plenty of henchmen to beat up. Shinobi, like most other oriental kick-'em-in's is instantly playable and you can bet your last yen it will take a fair time for you to rescue the kiddies and avert disaster.

'Where have you heard this before...'Enjoy frantic oriental action in this Ninja beat-em-up'. Well, there are quite a few games I could mention that start like that. So much for originality. Shinobi is a conversion of an arcade machine, and as I've never heard of it before I can't say how good a conversion it is. Loading up the game doesn't impress too much to begin with. Whatever happened to those brilliant full colour loading screens that built up in all sorts of weird and wonderful ways? Shinobi just has a variously shaded cyan screen, yeuk! But what about the game? Basically, It's Double Dragon with a few extra obstacles stuck on the ground to jump over. You have to be really careful and go slow, otherwise you wouldn't stand a chance. Shinobi is highly unoriginal, but if you're in to beat 'em ups you may find something to keep you occupied here.'

Shinobi, like most other oriental kick-'em-in's is instantly playable and you can bet your last yen it will take a fair time for you to rescue the kiddies and avert disaster.