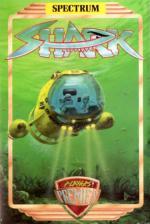 The Shark of the title is a new super-sub which you have to pilot into the Atlantic 5 seabase to rid it of the cheeky Snake brothers who have moved in without permission. In fact, they're so cheeky that not only have they moved in, they've invited a load of reptilian mates round as well!

The Snakes aren't the only cheeky ones, though. This is the second game by Players (the first being Task Force) which looks disconcertingly similar to the old Hewson blaster, Cybernoid. The screen layouts are similar, the controls are the same, even the extra weapons are practically identical.

But, of course, the copy isn't as good as the original and Shark is made ridiculously difficult by the heavily armoured enemy ships which populate the corridors and are so tough that they have to be shot at least eight times before they explode!

Smart graphics and sound but the gameplay suffers because of a supernatural level of difficulty.

Again, Shark looks and sounds neat, but it's plagued by the same piddly weapon problems, so it's not as much fun as it could have been.

Similiar, but not as good, as Hewson's Cybernoid. Made ridiculously difficult by the heavily armoured enemy ships which are so tough that they have to be shot at least eight times before they explode!