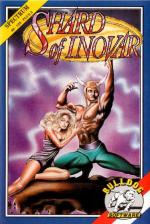 Yet another of those flash little icon-controlled adventures, in the style of Zzzz and Kobyashi Naru, and filled with funny names in a heroic storyline. You don't want to read it all, I'm sure, so here are the edited highlights: long ago on earth, plague every winter, natives grumpy, elves called Eharin turn up, create stone of Inovar, protects people, geezer called Arthemin looks after it, bad sort, loses it to Kiron, he bungs it in a chest, enter Varwield Secunda (that's you, dingbat), must find Inovar... okay, yah?

To perform this mighty task you can use the keyboard or a Kempston or Cursor-controlled joystick, and I recommend that adventurers blow the dust off their joysticks (it's quite legal) as that makes the icons much easier to control.

There are 26 icons around the sides of the screen, a graphic window on the left, an info window on the right, a scrolling info window at the top and your location and message text at the bottom. Icons cover moving, getting, dropping, saving and loading (including RAM), climbing, swimming, killing, examining, using - you know the kind of thing. With some of the icons, such as the spy-glass for EXAMINE, you must then highlight the word in the text that you want to examine, and if there's a response at all from the program then it's printed on the screen.

One of the icons is INVOKE, and if you can't imagine what an icon for INVOKE looks like then it doesn't matter as an explanation for each icon is printed up in one of the info screens as the cursor highlights it. INVOKE can be used with any of three Rituals that you've been given, and some information about these is given on the cassette sleeve.

Although this type of adventure looks quite impressive, it's unsatisfactory because one uses more a process of elimination than investigation. Use all the options in each place and in the end you'll hit upon the answer. Icons also tend to respond too quickly - keep the fire button pressed for more than a milli-second and you've missed a screen of information that might have been vital. And for all its flash presentation, this one still suffers from the age-old 'sudden death' routine, which most adventurers hate but lazy programmers love.

This is one of the better examples of this type of game, I thought, and I know some readers do enjoy them very much, but it's not to my taste. I lost interest when I encountered a Laryx, whatever that is, on the mountainside, and before I could retreat it butted me off the mountain to my death. I later discovered that you have to mount the beast. Well, what can I say? I hope you'll be very happy together.

This is one of the better examples of this type of game, I thought, and I know some readers do enjoy them very much, but it's not to my taste.