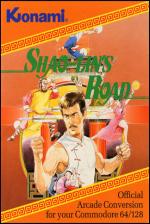 Lee has been awarded full honours in the secret martial art of Chin's Shao-Lin, a ferocious fighting skill which endows its master with the power to kill with one blow. Now armed with this terrifying power, he has gone out into the world to seek his fortune. Discovering a mysterious temple, Lee enters - only to find himself beset by evil villains who have decided that they're going to kill him...

This is where you join the action. Stepping into Lee's shows, you have to twice battle through five different scenes. Each scene has three levels and is three scrolling screens long. Lee can jump from one level to another, a useful ability which allows him to either dodge or attack the villains who inhabit each level.

When an opponent comes within range, Lee can lash out a deadly Chin Shao-Lin kick. The villain can retaliate, and each successful blow landed against Lee adds one point to his 'hit meter'. Sustaining more than three hits knocks Lee unconscious, relieving him of one of his three lives.

Occasionally, when Lee disposes of an opponent, a ball of energy appears. Collecting this endows Lee with temporary magical abilities, during which time he glows blue, and can hurl bolts of opponent-zapping energy across the screen. Lee quickly loses this power, and once again reverts to using his feet to defend himself.

To progress from one screen to another, Lee has to kill a prescribed number of enemies, with the desired number displayed at the top of the screen. When all of the villains are disposed of, Lee progresses to the next, more difficult screen.

If you're into barely average arcade conversions... then read on.

The graphics and sound are no more than average, and the gameplay is just about satisfactory. Things could have been marginally more interesting if Lee had been capable of a few more moves, but as it stands it's a limited (and eventually dull) platform/fighting games.

Shao-lin's Road is by no means brilliant - but it's not dire. It's easy to get to grips with - simple punching and kicking moves, with a dash of running around for good measure. But there's very little to it, and I didn't feel sufficiently inspired to come back for more. It's far too repetitive, and certainly doesn't offer ten pounds' worth of entertainment - give it a miss.

Oriental combat games seem to be all the rage at the moment, but this one contains nothing to set it apart from all the rest.

It's a fairly simple beat-'em-up, and the action is repetitive and not particularly enthralling - though to be fair, it is quite frantic. There are only a few different fighting moves available, and constant play may prove very tedious indeed - even for fans of the arcade version.

Graphics 62%
Sprites are badly animated, but the backdrops are functional.

Sound 43%
A below average tune doesn't add to the atmosphere, and the spot effects are very poor.

Hookability 66%
Easy to play, but not particularly exciting.

Lastability 41%
The five scenes don't offer much variation, and once they're cracked there's little to bring you back.

Value For Money 38%
Too expensive for such a limited arcade game.

Overall 47%
An average conversion of a none-too-impressive arcade game.

An average conversion of a none-too-impressive arcade game.