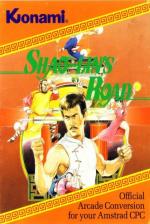 This is the follow-up to Yie-Ar Kung Fu. Yie-Ar Kung Fu II wasn't - because it wasn't the "official" Konami version. I think. So if it wasn't a follow-up, what was it? Confused? I am. There's more martial-art action in this one, which is a cross between Kung Fu Master and Green Beret.

The playing area is a couple of screens wide and made up of several rooms. You have to defeat a number of opponents on this level before moving on to another tougher level. Every couple of levels the background and floor layout changes, but this doesn't have much effect on the gameplay.

You can jump between floors at any point, and so can your adversaries. A swift kick will dispose of them but, if they bump into you, it's you that incurs the damage. You've got five lives and lose one every four times you get thumped.

When you kill some men, they release a blue sphere. Catching it will give you special powers for a while. These include a spiked throwing ball, fireballs and a protective star. When used properly these can dispatch large numbers of the enemy.

On every alternate level, a special opponent will appear who is harder to kill than the others and may have a special skill. Since the level always has to be cleared, you'll have to find a way of dealing with them.

The gameplay is quite demanding from the "run around kicking people" point of view but lacks variety. The weapons bring some interest to the action. A well-worn theme with reasonable graphics and sound but little special about it.

I think martial arts programs are a tired subject. It certainly takes much effort to enthuse over Shaolin's Road. Two screens of action, podgy characters and a sore hand are not the ideal ingredients. The gameplay is tough. Sixty kicks in the head is not enough to damp the opponents' spirit? Mine was positively drenched.

Pleasant backgrounds with large, animated characters, but the game lacks originality and sparkle.