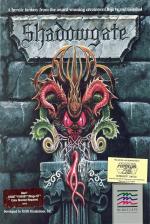 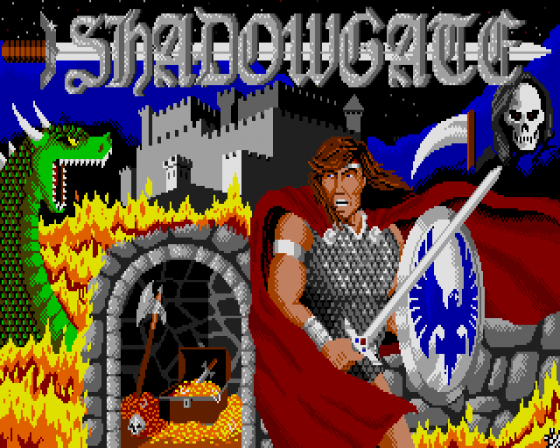 Ever been for a ride on a ghost train? Of course you have! Well, Shadowgate in some ways reminded me of when I was a kid, and used to be scared silly by all the monsters that suddenly appeared screeching in front of me as my truck rattled around in the darkness! Mind you, I never got killed riding a ghost train!

The game is played almost entirely by mouse, in the same way as Deja Vu - in fact, it is from the same people. But I played Deja Vu on a C64, and the format is infinitely more playable on an Atari ST, making full use of the window facilities built into the GEM Operating System.

Centre screen is a square picture window, displaying the current location. Below is a text window, in which a commentary of the action is displayed. Above is a command verb window, displaying a relatively small number of verbs. To each side is an area of background, upon which are placed a number of smaller windows for Inventory, Self and Exits. The inventory window can be dragged around and plonked wherever you life; it can be resized, and scrolled when it contains more than is displayed. If you open a container, another window opens, to display its contents. 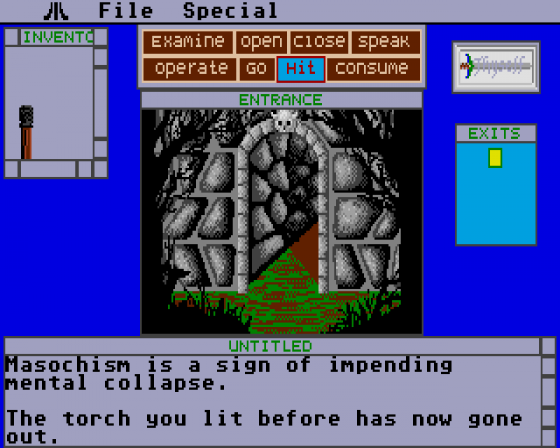 To GET an object, you simply place the cursor arrow over the object in question, and drag it into the inventory window. Dropping something is the reverse. A command is entered by selecting one of the verb icons above the picture, although for the most common of these, there are short cuts. Double-clicking on something will usually EXAMINE it, double-clicking on an exit will first open it, and then take you through.

The only time you need to touch the keyboard is when you select the "Speak" icon. At this point, a large window opens up with a line in which you can type what you wish to say, and then you can click on the OK box.

That then is the method of operating the game, and very slick it is too. But what makes the game so highly entertaining is the superb use made of animation within the picture area, and the sound effects that go with it.

You start off outside the door of a dungeon, which creaks as you open it. You soon find yourself in an arched hall. A pair of eyes look down on you, and a mocking laugh greets you. The torch you are carrying soon dies - and you with it, unless you have taken the precaution of lighting another. This is done by taking one off the wall in the hallway, and selecting the "Operate" icon, then clicking on the lit torch followed by the unlit torch. Hey presto! Another lit torch! Not much of a problem, but it forces you to become used to operating the icon system at the outset.

There are two doors in the hall that look inviting - but finding the key to unlock them I will leave for you to figure out. Onward, then, through a passage until you reach a stone corridor with three doors. Where to go next? An adventure of exploration of the unknown, full of danger and excitement, follows...

It pays to look around very carefully, and to save the game at frequent intervals, for there are plenty of sudden death traps to fall into - and it is essential to check every exit out. Some lead to ordinary pits, which, believe me, are far more painful than the bottomless variety!

As you move around and poke your nose into things, be sure to have the sound turned well up, and be ready for shocks! Try opening the first sarcophagus on the left, in the pillared hall, for example! And stand well back as you try smashing things in the hall of mirrors!

Shadowgate comes on two disks. It will, of course, run on one drive systems, but if you have two, put one disk in each and it will save swapping. Great entertainment, with surprises and puzzles all along the way!

Great entertainment, with surprises and puzzles all along the way! 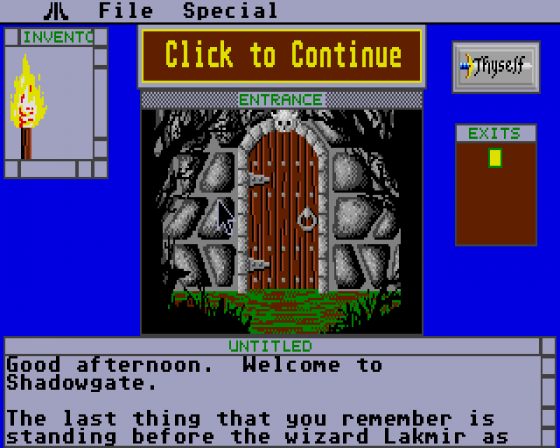 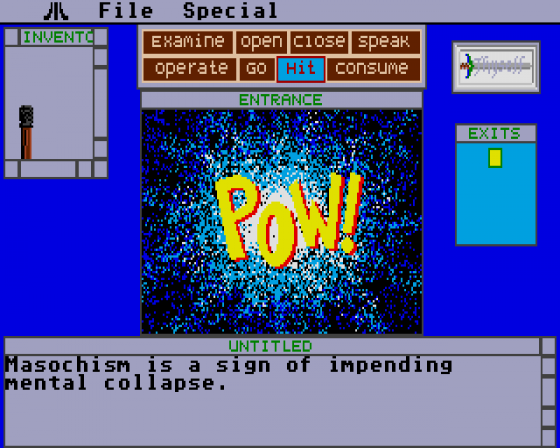 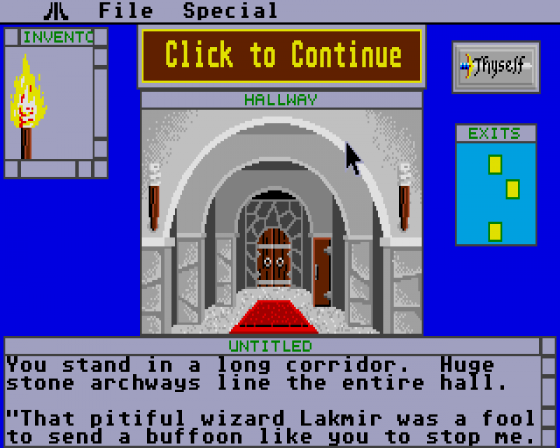 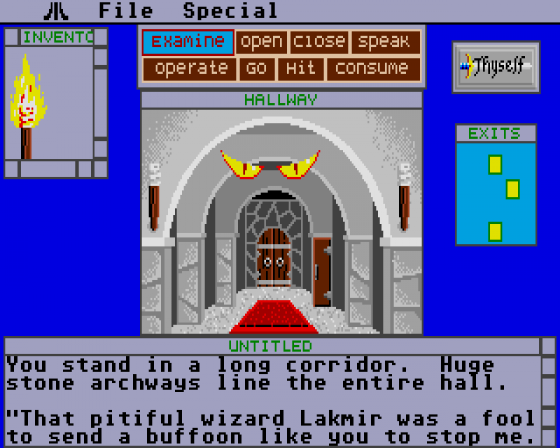 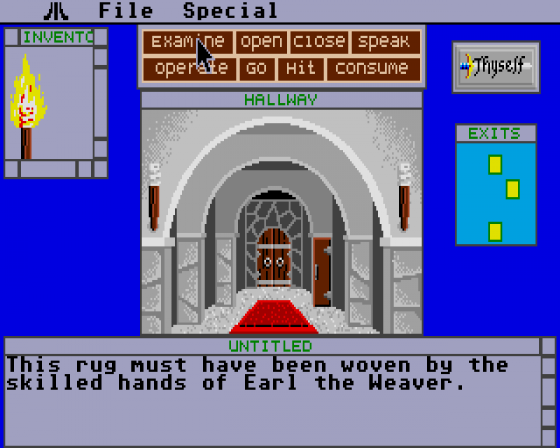 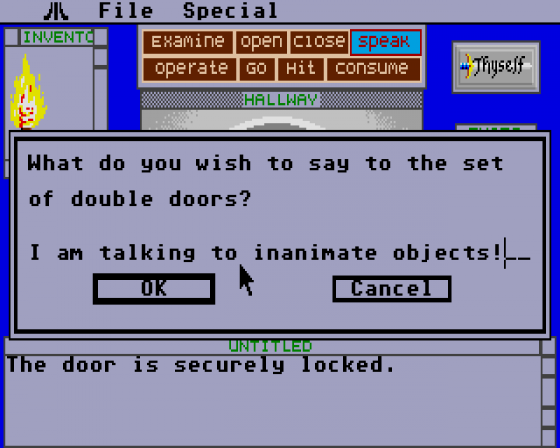 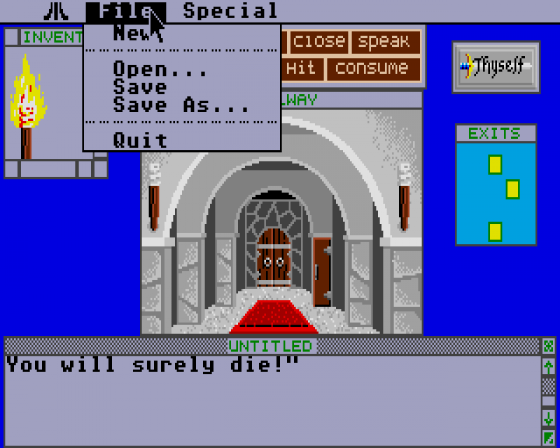 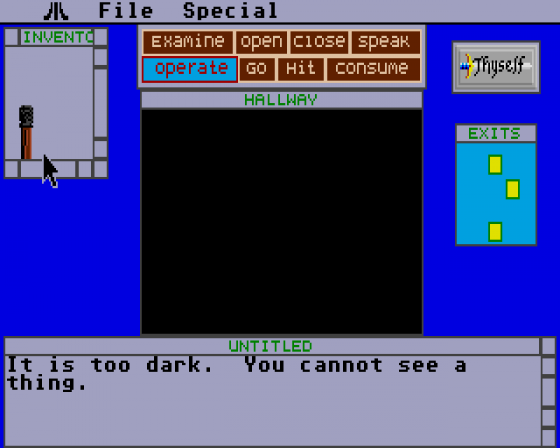