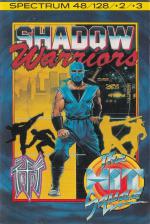 This game has long been acclaimed as one of the Speccy's prettiest beat-'em-ups, and something of a technical achievement to boot. It's stuffed with lots of huge multi-coloured sprites which leap around all over the place without all that ugly colour-clash nonsense. It's not a bad conversion of the original Tecmo coin-op either, but it all starts to go a bit wrong when you remember that said coin-op was a complete load of old tosh...

The big problem with Shadow Warriors is much the same as the one with Golden Axe (reviewed two issues ago) - there's almost no skill involved in playing it whatsoever. In fact, in one respect it's even worse. While in Golden Axe, the mainstay of your strategy was walking up to the bad guys and hammering the fire button repeatedly, in Shadow Warriors it's not even that complex - a couple of tweaks on the joystick get your character moving, then you can keep up a constant barrage of athletic kicks and punches simply by holding the fire button down. Any enemies who walk into the onslaught get creamed, and you're basically only in trouble if two of them attack you at once from opposite sides. If that happens and one of them actually scores a hit on you, your character gets completely paralysed and can't move again until he's taken another couple of hits and lost a unit of energy, at which point you simply launch into the old limbs-a-flailing routine again until you've eliminated all opposition by a simple matter of attrition (they've got you outnumbered, but you've got multiple lives and about a thousand continues - ha!).

Still, there is a bit more to the game than with Golden Axe. The scenery is interactive, which means you can leap up and down on roofs and walkways to avoid baddies, swing from lamp posts to kick 'em in the chops, or send them crashing into telephone booths to reveal power-ups and bonus items. There are a few nice touches later on too. such as the huge cars which drive 'into' the screen, turning crossing the road into a highly dangerous pastime, or the big nasties who thwack you around with telegraph poles. Other than that it's all incredibly repetitive, pretty confusing and definitely uninspired stuff.

Despite a few nice touches, it's all incredibly repetitive, pretty confusing and definitely uninspired stuff.