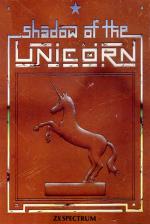 So here it is. The first Mikro-Plus game from the people who brought you the chartbusting Wally saga.

Ever since the long lost Imagine company began talking about mega-games which would only work with extra-bits stuck into the back of your computer, people have been waiting to see just what it was all about. They waited, and waited...

But now something of the sort has appeared. Is it a genuine way of producing better games? Or simply a new way to stop you people pirating software?

Let's look what you get for your £15. To start with, you get the Mikro-Plus gadget which adds an extra 60K of usable memory to your Spectrum. You plug it into the back of your machine like any other interface and stick your joystick into the built-in socket.

Then you get the Unicorn game-tape, a map and instruction booklet, plus a 100+ page novel giving the background to the lands which lie under the Shadow Of The Unicorn. The game won't work without the Micro-Plus.

The tape also includes a tape head alignment utility on the B-side - which is pretty useful. So you've already got quite a bit for your money. But what about the game itself?

It has a basic swords and sorcery plot. Your task is to recapture the evil forces that have been released on the two kingdoms of Oranfal and Falform. Like Lords Of Midnight you can control - to start with - three characters. These are Mithulin, King of Oranfal; UlinGail, a satyr and the King's friend, and the Wizard Avarath.

But as you explore and meet more people your forces increase. Each are accessed - Wally style - by pressing the appropriate key. Each have their very own purpose and affect the success of your mission.

At first glance the game doesn't look that impressive. The graphics just are not up to the quality of Pyjamarama or Herbert's Dummy Run for example. And despite all that extra memory there are still colour clash problems.

The main characters are depicted as black outline silhouettes - with a bit of grey shading in some cases.

It's a good idea to simply take one character and wander about and explore once you've loaded the game for the first time. Pay close attention to the compass at the top of the screen and the location details which flash up - Dun Darach/Tir Na Nog style at the top of the screen. Also above the main window you'll see two bar graph read-outs. Green for your energy rating, red for your injury status.

It helps to use the map supplied, although not all the locations are marked on it. So beware! Once you've got your bearings and are happy with the controls, it's time to start on your quest.

In true Mikro-Gen style, you have to find certain objects and use them in the right way. You really must take time to read the novel which comes with the game, otherwise you won't pick up on some of the useful clues contained within its pages.

It would also be advisable for the player to make a map as you play. You can get lost very easily - told you it was big!

Is the Mikro-Plus a great new innovation? We reckon that still remains to be seen with the arrival of the second game based on the TV cartoon series Battle Of The Planets.

In the meantime, if you can persuade your parents to part with the dosh - Christmas is coming up fast - then put Shadow Of The Unicorn on your shopping list. You won't be disappointed.

With Christmas coming up, put this on your shopping list immediately.