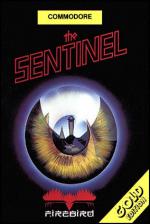 The Sentinel is watching you! Is it a sure Firebird success or is it just eye in the sky?

On one of the small planets of the Empire the atmosphere is still except for the rhythmic, mechanical click of the Sentinel guard perched high on its vantage point. With each click its gaze scans a new vista of the insurgent synthoids, the tools of the rebel forces. The long arm of the Sentinel now encompasses 10,000 worlds in a tight, choking grip.

On the plateaux which interrupt the jagged landscape grows the tree-like vegetation which forms a monocultural fuel source but this is the only life-form which the Sentinel robot can detect. All seems peaceful but a rebellion is underway and soon the calm will be broken.

The rebels have dispatched a synthoid robot as part of their systematic attempt to regain control of their lands which were seized by the tyrant. One robot against 10,000 outposts, the mission is daunting but the rebels are a determined group. The Sentinel must die.

The robot controller sits at his console surveying the scene through the vidcam of the synthoid. As the robot scans its own part of the planet, the ever-alert Sentinel is watching and ready to drain every ounce of energy from the rebel machine.

Have you ever had one of those dreams where you feel everyone is watching you? Believe me, Sentinel makes you feel that way and more. As the controller of the synthoid robot, you engage in a fatal game of hide and eek against the Sentinel. As the robot materialises on one of the Sentinel's planets the display shows an overall plan of the 3D landscape. All of the plateaux and valleys must be committed to memory, especially the position of The Sentinel.

The only information you lack is the starting point for your robot so your first task is to try to locate the Sentinel and orientate yourself to your destructive mission.

At the start the Sentinel will not be scanning the part of the planet on which you materialise but its head will be turning through an angle of 30 degrees per move as it surveys the land around like a malevolent lighthouse. If your robot falls under the Sentinel's gaze, an indicator at the top of the screen registers that a scan is being made and you have only a few seconds to move as your energy is drained.

Moving your robot is a cumbersome business because the machine employs a system of short range teleportation. First, a receptor robot shell must be placed a suitable distance away. The robot can then project itself into this shell and regain the energy required for this process by absorbing the discarded shell into the new body. Although the robot has a reserve of energy to begin with, it must absorb trees to keep its strength up. If the energy falls close to zero, the robot cannot generate a new shell and therefore becomes immobile and can fall prey to the Sentinel.

The energy hierarchy can be broken down in terms of tree energy. Three threes provide sufficient to create a new shell, two trees can produce a boulder and one tree's worth of energy can be used to replicate the tree as a shield against the Sentinel in an emergency.

The landscape s precipitous and one of the laws of teleportation is that you cannot project a shell onto a surface which is higher than the robot's "eye" level. This means that you would often find yourself at an impasse if you ventured into a deep gully. Fortunately, you have the power to create synthetic boulders which can be used as stepping stones to higher ground.

Another rule is that you can only absorb a tree or robot shell if you can see its base. Once again, boulder creation can help you to reach more power sources than could be accessed from ground level.

Whilst you are trying to gain enough energy to scale the heights to the Sentinel's vantage point, it is rotating, about its axis and you hear each move as it is made. The tension in the game can be tremendous especially if you haven't ascertained where the Sentinel is and you therefore don't know which way the Sentinel is rotating so moving to a new shell is a haphazard business which could soon bring you back under the Sentinel's gaze very quickly.

When you move, the new robot is always looking back towards the recently vacated shell so re-absorption of energy can be executed quickly. If you were being scanned when the move was made you will have to be quick because the Sentinel will still be draining energy from the old casing. As you watch the old robot turns into a boulder, then into a tree and then it will disappear if your previous casing was standing on synthetic boulders. One by one the boulders will regress as the energy is drained until there is only a tree to mark your last position.

Occasionally, the detector will register a half scan. This means that the Sentinel cannot see your base and is prevented from draining your energy. Although you are safe for the moment, the Sentinel has the ability to convert a nearby tree into a Meanie. In some ways these are more dangerous than the Sentinel. A Meanie looks around much aster than its creator and, if you can't destroy it quickly enough, or move, you will be blasted into hyperspace. This uses three tree energy units. If you have less than this, the game ends.

You can force a hyperspace if you find yourself in a panic situation. The trouble with hyperspace is that you never know where you'll come down and this could be a worse position than before. You could well find yourself with insufficient energy to create a new shell and not a tree in sight. In such a position, you have two choices but each result in the same fate. You could wait for the Sentinel to spot you or, for a quick death, try to hyperspace again.

Once you get to know the landscape you will find that fewer problems beset you as you avoid the situations recurring. Eventually, you will sneak up on the Sentinel and be able to position yourself where you can see its base while its back is turned. Now you can absorb its energy and prepare to move on to the next planet. Before you do this, think very carefully; to move on to the next stage of the game, you must hyperspace.

To end the game you have to place a robot shell on the Sentinel's plinth and then go into hyperspace. This takes six tree units of energy. Absorbing the Sentinel gains you four units, so you must have a boulder's worth of energy before you go in for the kill. Once the guardian is destroyed you lose the ability to absorb energy.

Other worlds can bring extra problems as the Sentinel is supported by Sentries. There is no real difference between a Sentry and the main unit. Both will scan you to death and woe betide the unfortunate robot who becomes the object of attention of several scans at once because the energy drain is rapid and frequently unstoppable.

The Sentries must all be absorbed before the main Sentinel can be destroyed which means great stealth and planning must go into such a venture.

It's pleasing to note that Sentinel was developed for the BBC computer first of all and that all other versions will stem from this. Rarely can we BBC owners crow about an arcade game, but good old Firebird took the Elite lesson to heart and have not ignored our market. In fact, things are looking up all round with Firebird's much awaited Cholo (rhymes with solo) about to be launched on the BBC world and Superior's Stryker's Run promising a happy Christmas all round.

Before I bore the owners of other computers with my crowing, I'd better mention that the C64 version is being released simultaneously and that Spectrum and Amstrad versions are not running far behind.

It's pleasing to note that the Commodore conversion is in every way the same as the BBC game. Although I'm against 'straight' conversions which pay no regard to the special facilities which a different machine possesses, I feel disappointed when the game is altered out of all recognition.

If I see a game on a friend's computer, that is the game I want to play on my machine, not something else masquerading under the same name!

Like the BBC game, the C64 game uses keyboard controls with no joystick option. I can't say that this noticeably handicaps the game in any way, once you get used to the keys. In both cases a key redefining facility would have been helpful but the selected keys are fairly sensibly chosen.

Considering that this game is a strategy game of cat and mouse in the true chess tradition, the sections are short enough to be classed as truly addictive. Each completed assault reveals a code which can allow entry to another world so you can start where you left off each time you reload the game.

Firebird will have another hit on their hands with this game and it certainly will be in the running for my game of 1986.

Firebird will have another hit on their hands with this game and it certainly will be in the running for my game of 1986.