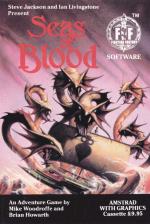 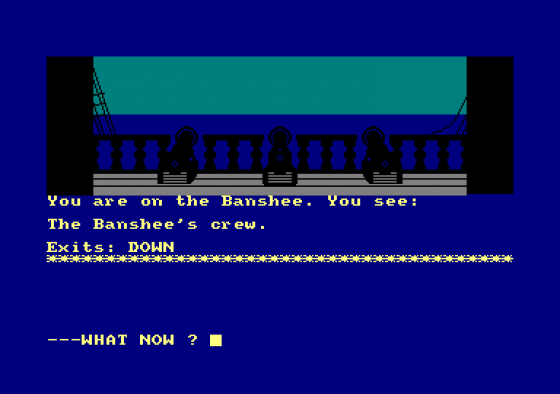 There must be quite a few adventurers who have waited impatiently for this game. It certainly boasts a terrific pedigree - written by Steve Jackson and Ian Livingston of 'Fighting Fantasy' fame and programmed by the Gremlins team at Adventure International, it promises quite a few surprises.

You may recall, however, that the Plig wasn't entirly complimentary about Robin Of Sherwood - a potentially excellent game that was slightly marred by the way the program responded to your inputs. Well, Seas Of Blood is rather similar in *some* ways - it could have been an all-time best, but - although it's still pretty hot - it doesn't, in the Plig's opinion, quite make the 'Classic' league.

The plot is pretty simple. As a big, bad Pirate you must sail the Inland Sea in your trusty vessel, the Banshee, seeking out treasure and sending anyone who comes in your way to Davey Jones' Locker.

As usual, the graphics are excellent. The blurb boasts 300 locations with a picture for each one, but as is often the case a large number of these locations are simply variations on a theme - in this case variations on the remarkably uninteresting expanse of ocean over which you are sailing. However, when you encounter another vessel you do get a very impressive view, and the representations of the various ports and other land-based locations are equally impressive.

The main interest in the game is the combat routines. The Fighting Fantasy books were particularly noticeable for their use of dice to determine the outcome of a fight, and this technique has been particularly well-adapted to the game. Whenever you attack someone, or they attack you - which in this X certificate adventure happens about every other move! - the text display clears and two sets of dice appear. One represents your destiny, the other that of your opponent.

First, your opponent's dice begin to spin frantically. When they come to rest, a value is printed which you must either match or beat. To do this, you keep a close eye on your own dice, which are now spinning, and hit a key to stop them when you think they've come up with a winning throw. In fact, the outcome is largely one of luck since they spin so fast it's really impossible to stop them at the right moment.

Winning a battle increases your experience but at the same time may, if you're unlucky and get wounded, decrease your strength. These factors are crucial in the game since your strength is added to your dice throws (as is your enemy's) and it is essential to keep it as high as possible to be sure of winning. Predictably, your opponents tend to get tougher as the game progresses.

As far as inputs and vocabulary are concerned, this game suffers from similar drawbacks to its predecessor, Robin Of Sherwood. Apart from simply ignoring anything it doesn't understand, it also has a very annoying habit of assuming that any word following an "EXAMINE" command is a valid one. For example, if you enter "EXAMINE STARUE" by mistake, instead of "EXAMINE STATUE", the program will reply "You see nothing special". This can be highly misleading, as there *is* something special about the statue and you'll be losing out if you don't find out what it is.

The combat routines, however, make Seas Of Blood a very enjoyable game, even if it can be tiresome at times. It's not very easy to map - the Pilgrim advises you to keep close to follow the shoreline to begin with so that you can map the inland sea more easily. Other than that, your best bet is a sharp sword, a quick eye, and a blue beard. Up and at 'em, me hearties!

The combat routines make Seas Of Blood a very enjoyable game, even if it can be tiresome at times.