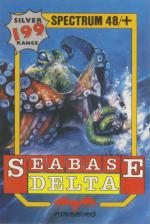 "Ontvlucht de vijandelihhe Zeebasis" commands the inlay in one of six different languages; in English that means escape from the enemy's seabase. This is the sequel to the popular budget game Subsunk, and again you play wittily named reporter Ed Lines. The brief instructions tell you little more than the sentence given above; if you had never played an adventure before, this would be very confusing.

The game has some fairly attractive full screen graphics, drawn with The Illustrator, and reasonably descriptive, though not really Booker Prize winning, text. Vocabulary is very friendly for a Quilled game; in particular EXAMINE is surprisingly responsive, and often gives somewhat blatant clues (for examine, examine the dead man and you're told "No sign of life - perhaps his pockets...")

These contribute to making Seabase Delta apparently fairly easy; my initial impression is that it won't provide much challenge to the experienced adventurer. The puzzles are entertaining enough though, and mostly logical. It's a very nicely constructed game and you feel a real sense of progress as you play.

As well as the friendly vocabulary, there is a good range of messages as a result of various actions. Unfortunately though, there are some unnecessary, lengthy pauses when messages are revealed, which the player cannot speed up. Also, presentation could have been improved. Perhaps with a re-designed character set.

Generally though, good fun to play and worth the asking price. It's particularly good for the novice adventurer. I hope to see more cheapo adventures of this quality in the future from Firebird.

Good fun to play... and particularly good for the novice adventurer.