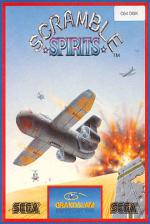 Despite a graphically attractive Amiga intro, the actual scenario of Scramble Spirits remains very obscure. Not that it matters much as this is yet another vertically scrolling shoot-'em-up with one or two players battling through wave after wave of alien invaders.

To smash such opponents as helicopters, biplanes, tanks and ground installations, pressing fire sends out both bullets and bombs. If you destroy one of the big helicopters a small aircraft appears which can be collected to fly in formation with you. Hold down fire and it will flash, causing a smart bomb effect (but don't do this too often or it self-destructs!). You can choose to have the small planes attack either ground or air targets.

There are six levels and you start off with five levels and five continue-plays.

I wasn't impressed by this in the arcades; it's one of those instantly forgettable shoot-'em-ups which you don't ever want to see again.

The C64 is impressive technically, with plenty of sprites and a two-player mode but the gameplay is so weary and graphics disappointing that I was never hooked. The Amiga game isn't quite arcade-perfect, but fairly close although that isn't saying much. Clearer in-game presentation makes it easier to play, although it's still pretty dull apart from some interesting motherships.

Who says they don't make them like they used to? Clapped out ideas and a complete lack of originality often results in games like this terminally dull effort.

This very weary coin-op gets an attractve, if hardly spectacular coat of graphical sheen on the Amiga but is very mediocre on the C64 - apart from the odd nicely defined enemy biplane it's extremely dull. More sharply defined graphics make the 16-bit game more fun to play, while the C64 game looks so tired I fell asleep after only a few minutes play!

Sound 40% Mediocre spot FX with okay tunelets at the end of each level.

Graphics 68% Quite attractive sprites, but surprisingly undramatic overall for a shoot-'em-up.

Hookability 57% Sharper graphics make it easier to get into than the C64, but still quite tough.

Overall 59% A good conversion of a poor coin-op.

A good conversion of a poor coin-op.