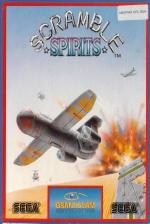 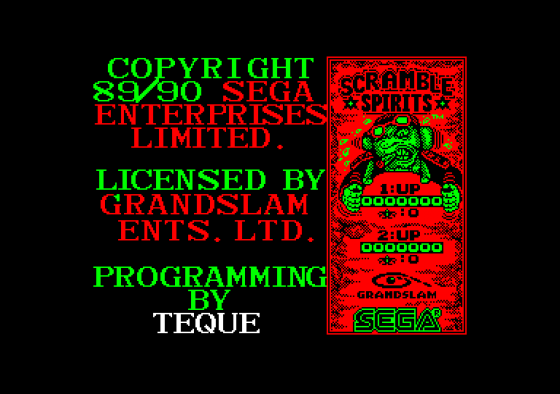 Fighter pilots of WWII have a certain mystique. They were the last generation of fliers who fought with guns and not guided missiles. It was the skill of the pilot, and not the technology he carried, that decided the outcome.

For these reasons, WWII planes have been the basis of some famous shoot-'em-ups: 1942. Typhoon and last month's P-47, to name but a few. It's also the setting for this Sega licence Scramble Spirits, a two-player blast that has you bombing, shooting and strafing everything even slightly German. But why "Scramble"? Well, because "Scramble!" was the command that would launch them into their planes and a life or death struggle...

A horizontal shoot-'em-up, the game opens with one or two pilots taking to the air. They scroll to the top of the screen and the battle begins. The planes have a double front cannon and move in all directions, while the screen rolls relentlessly down. Nazi planes wing in from the top and sides firing away, generally proving little trouble unless they pop on in an unexpected position. 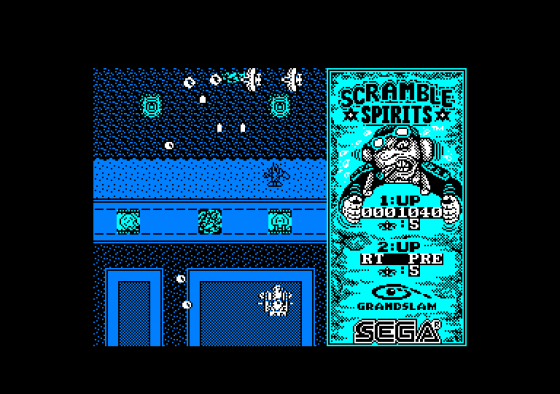 The ground forces needn't feel left out, there are plenty of bunkers and tanks to put up flak. These can be bombed out of existence with the front guns, which also drop large amounts of TNT ahead of the plane. With waves of aircraft and ground fire, things can get pretty hectic, but it's nothing an experienced arcade player can't handle.

Odd things happen every now and then. Smart bombs and extra firepower appear, but prove difficult to collect, and more trouble to use than they're actually worth. Special formations of gun emplacements make things even trickier, and life shorter. The end-of-level guardians are particularly hard to kill, but far from dangerous.

The limits of the game are obvious from the word go. The monochrome (well, two-colour) world is far from enthralling to look at. The sprites are small and the bullets occasionally invisible. There's no pace in the game, you plod along just shooting and waiting, life never getting any harder. This could be due to the lack of 'power ups" on offer, but also the fact that it's hard to make a horizontally scrolling shoot-out any more difficult without making it impossible to play. 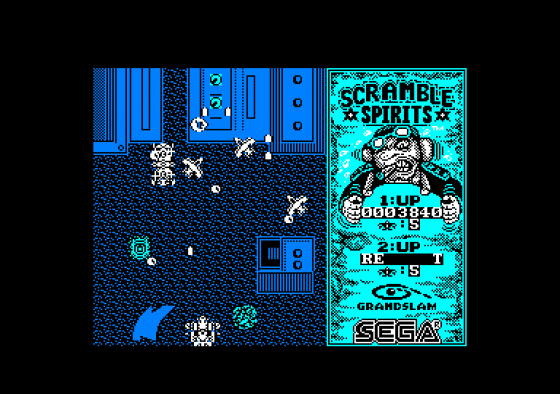 Technically, Scramble Spirits is fine. The planes move where they're told quickly and precisely. Yet this can't disguise the fact that it's boring. Even in two-player mode there is little to do but hang around and slaughter people in their thousands (even a weird key selection doesn't make it any tougher). The screen speed is slow, there are large gaps between the level's end and the guardian, and precious few 'pretties' to look at in the meantime.

The credit feature just makes things worse by being too generous. It probably sounded a really smart idea in the planning stage, but effectively lets you carry on getting nowhere - slowly.

Looking at the number of shoot-'em-ups Sega has designed over the years it's not surprising that it comes up with the occasional donkey. This is one of them! It runs to the same old formula and doesn't introduce, or even consider, any fresh approaches. Had it been done in glorious technicolour then at least there would have been cries of "nice graphics shame about the game"...

Scramble Spirits illustrates the worst side of the games industry, where any licence is preferable to the risk involved in an original product. And software houses are often unable to change the basic design of the licence even to make it suit a home computer instead of an arcade.

Scramble Spirits is programmed proficiently and plays without a glitch, but it takes more than that to make a good game. It plays like a Kylie Minogue record - everything's in the right place and does what it should, but the end result in incurably bland. Besides, at least Kylie Minogue's got nice... [er yes, that's enough of that - Ed]

Quite apart from the fact it's an obvious Speccy port, it's just too easy and too dull. It's bad enough in two-player mode where all there is to do is argue over who gets the power-ups, but for one player it's worse.

Grab Factor 66%
P. You can go far on the first at the try.
N. Endless credits!

Overall 41%
Technically together but uninspiring arcade.

Quite apart from the fact it's an obvious Speccy port, it's just too easy and too dull. 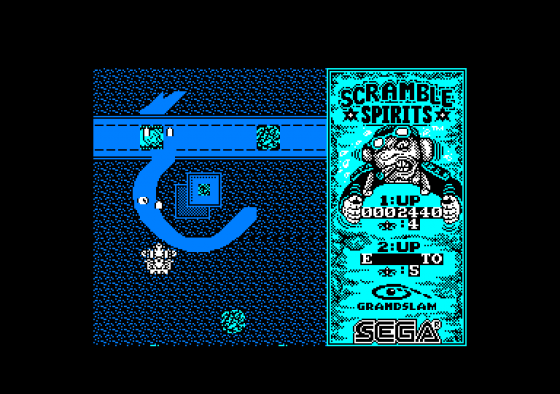