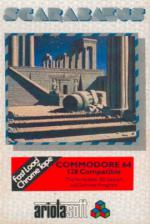 My quest to find Scarabaeus, the fabulous emerald of the Pharaoh, began disastrously. As I entered the tomb, a venomous spider bit me and now its slow terminal effect is beginning to bear heavily upon me. I know that the Tomb contains medicines that can cure me, but there are also poisons which are far deadlier than that of the spider's. At least I have the ancient scriptures to help me work out which are which, but mostly I must rely on my own instincts.

At this present time I'm standing just inside the entrance of the tomb. My heartbeat echoes eerily in the emptiness of my surroundings and the ragged sounds of my breathing only make me feel uneasy. It's a bit like standing in a maze of giant hedges, although this is a far cry from Hampton Court. Everywhere I walk there are passageways leading left and right, some long, others leading to dead ends. Thankfully I have with me a map of the tomb to show me where I am, otherwise life would be very difficult. I also have with me my health gauge which shows how near to death I am and a heart register so I know when I'm pushing myself to exhaustion. I'm ready to go now ... I sit and ponder upon the old scriptures, I know what I have to do but I wonder if I am capable of doing it.

On the first level I find the ghosts of the tomb. I know from my readings that they will not kill me if I touch them - instead they give me a hieroglyph, nine of which fill a key. Once the key has been completed I can examine it and take note of the position of all the hieroglyphs. This should allow me to distinguish between medicines and poisons on the second level.

Getting to the second level is by no means easy. A hand-operated lift lakes me there - the trouble with the lift is that perfect rhythm is needed to make the lift go up or down. One slip as the stick is turned clockwise or anti-clockwise and the lift falls a level giving a terrible jolt which isn't too good for me in my current state of health.

I know that the second level is much the same as the first, only differing in the colour of the walls and in its size. I study my map carefully. Marked on it are the places of information - these, if used correctly, should give me potions and traps for use in the final and very dangerous third level. Each place of information has a giant spider guardian which chases me once I've opened its door. Once I have lured away the spider, I must return to the place of information to retrieve the useful items. Losing the spider proves no difficult task, but using the key to work out whether I should take the zombie trap and whether the potion is poisonous or not before the guardian catches up with me again, isn't so easy. In one of the places is the key to the Pharaoh's tomb on level three. This is in the form of a slide puzzle which I have to move around to form the shape of the key before it can act correctly.

When I reach the final level, horrors yet unseen try to thwart my progress. On this level are more information recesses, although this time they are not properly guarded. On examining a recess, ancient machinery causes a door to smoothly slide upwards, revealing a shelf contained within. On this shelf there should be a bottle of antidote - or is it poison? If I recognise the bottle from the previous level, then it will be safe to take since it must be the antidote. If I've never seen the bottle, then it must be poison and should left well alone. On examining a place of information a zombie is activated and they chase after anything with living blood in its body ... I must be very careful, yet swift. The zombie traps come in useful here and could well save my skin more than once - I'm glad I made sure I picked up all four on level two.

When all the antidotes have been recovered I can make my way towards the Pharaoh's tomb, which is located in the centre of the maze, to complete the final task. Examining one of its eight entrances will give me a fiendish puzzle of the sort only the diabolical Pharaoh could have thought up - forty moves to rearrange the hieroglyphs into a regular 4 x 4 key so that any column of hieroglyphs will match any line. If the puzzle isn't completed within the forty moves, then the door is barred and another entrance must be tried. It's difficult and torturous work, but well worth it for the great emerald Scarabaeus lies behind those confusing doors ...

My mind snaps ... why am I sitting dreaming when I should be trying to find an antidote? I take a last stare at the sky which is shining through a tiny portal in the ceiling and start towards the lift that will take me to level one. Will I ever see the sky again, or will stone blocks be my only company for infinity...

Maze games have appeared before by a variety of people, but this one really is the best. The graphics are smooth, colourful and different. The puzzles take some working our and these too, are superbly handled. The animation is faultless, being just about as good as any you could hope to achieve on the Commodore. The sound effects are nothing short of amazing as well. The main tune is excellently written and other sounds are pretty good, but the main effect which impressed all of us, was the breathing and heartbeat sequence. The atmosphere this creates is absolutely spot on - really dramatic. Even the tune played in the elevator sequences is designed with a weird rhythm to throw you out, when you're attempting to reach other levels.

If only there had been a little bit more to the game, it may have been a classic, but as it stands, it's brilliant.

It's difficult to know how to describe Scarabaeus. I wouldn't really call it an arcade adventure nor would I class it as a strategy game or simple maze variant. No, it's something much more involved. I think 'brilliant' sums it up guile nicely. Both graphics and sound are exceptional and the atmosphere generated during play is really something else! The music gives the game a sense of urgency and excitement, while the heavy breathing and heartbeat sound effects make things very tense. The problems posed are taxing and absorbing and I must say I have never played anything quite like Scarabaeus before. This is one hell of a smart game that no self-respecting Commodore owner should overlook.

Graphics 96%
Fast 3D scrolling maze and excellent all round appearance.

Hookability 96%
Once you start you really get into it.

Lastability 97%
And there's a lot to do and work out.

Overall 96%
But a brilliant one at that.

A very strange game, but a brilliant one at that.