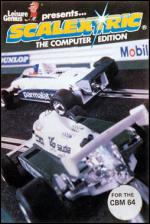 Racing games are getting better and better, and like this game, they are getting more and more playable.

the game opens to a string of credits and copyright messages, and Fleetwood Mac's theme from the BBC's Formula 1 TV coverage playing over the top.

This is where the Scalextric connection comes in. You can select sections of track from a range of standard Scalextric pieces. You use these to build up a track of your own. Bits include, not just straights and different types of curve, but chicanes, curved chicanes, and banked sections.

The racing is not just limited to two slots, a la Racing Destruction Set, but is more similar to your standard racing game, where you can drive anywhere on the track.

Two players can play each other on the keyboard or joystick, or against a computer opponent with three levels of competence.

The game is very well put together and there are some nice touches. The speed of track drawing is a bit slow, so cycling through the built-in tracks can take a long time. I would also have liked to see a facility for modifying an existing track. You can also load and save your own tracks to build up a library of the rather juicy one.

The designer is very good, and you knock up a decent track very quickly. Most of the main Grand Prix tracks are represented, though I would like to have seen more British tracks. Altogether a very good game.

Altogether a very good game. Most of the main Grand Prix tracks are represented, though I would like to have seen more British tracks.