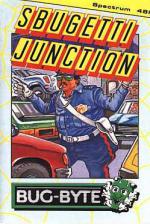 Sbugetti junction is a game of skill and judgement starring a put-upon traffic policeman. Louigi Pepperoni is a trainee traffic cop on loan from sunny Italy to find out how the British manage to have less accidents on their roads than their hot-blooded companions in Rome. Although Louigi has had quite a bit of training, his performance is still a bit shaky. Now in Britain to further his training, he's been turned loose on an unsuspecting public to direct the traffic in a busy street.

Louigi has to get large numbers of vehicles through certain junctions safely and without any unsightly pile-ups. If he manages to pass the tests set him, he can progress to the next junction and so on until he is a fully fledged traffic policeman who knows what he's doing. Once Louigi has achieved this status he can return home to Italy and become reunited with his voluptuous wife, Fettucinee.

Louigi directs the traffic by way of a number of hand signals which you control by pressing the relevant keys. Each section of traffic has to be properly co-ordinated and each vehicle sent where it's supposed to go. Miscalculation in this area causes large accidents and Louigi's life may also be in danger from a mis-directed car. It's not just the continentals who get hot under the collar and shout a lot when driving. According to Sbugetti Junction. the British can get quite stroppy too. If Louigi keeps the lines of cars waiting too long then he'll be in for a bit of aggro...

The game is played against the clock. Louigi has five minutes in which to complete each junction. If the cars are kept waiting then they start to beep him, and if they beep Louigi too much for too long them the game-a is-a prematurely-a terminated, or as we say in English, it's curtains for Louigi.

There are three levels to the game. Louigi can choose whether he wants to direct light, heavy, or if he's feeling particularly ambitious, rush hour traffic. Louigi is actually over in Britain to learn about our traffic rules, but if you feel like doing a bit of traffic controlling au continent, then there's a European option in the game where all the cars drive on the right hand side of the road.

Points are awarded for cars correctly navigated across the junctions with the current high Score shown below for you to try and beat. Please try to help Louigi control the traffic successfully so that he can return to the land of Pasta and motzerella, and be reunited with his estranged wife and his bambinos which he a-misses so-a much-a.

A simple game with nothing wonderful about it. Not really recommended.