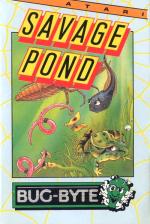 This is another of the games that Argus Press Software released a couple of years ago and are now re-releasing in budget format. The game was originally produced by Starcade (Remember them?) around the time that APS bought them (1984). Now out again, new Atari owners can sample the delights of this highly original game.

The scene is set in the local pond, with you as a lowly tadpole trying to grow up in a world filled with all sorts of belligerent monsters - amoebas, hydras, bloodworms, dragonflies, jellyfish, beetle larvae, spiders, water-fleas and mutant bumble bees. All this and the most deadly animal of all - Man...

The aim of the game is to nurture your collection of frog spawn into a healthy colony of frogs. To do this, you control the tadpoles one by one, eating food and avoiding the perils that a life afloat can bring.

The graphics for the game comprise a vertical cross-section of the pond complete with mud and banks on either side of it, with the hydra and various other nasties dotted around the bottom and sides. Dragonflies whizz about above the surface of the water dropping their larvae, while the dumper truck dumps nuclear waste in the pond.

If you survive all this swimming about in the pond then you can hatch out another egg. As I said before, this is a very original idea and is executed well on the Atari. It isn't exactly a high-speed shoot-'em-up, but then it doesn't require much in the way of thought to play the game. But that said, it's jolly good fun.

An original idea, executed well. It isn't exactly a high-speed shoot-'em-up, but then it doesn't require much in the way of thought to play the game.