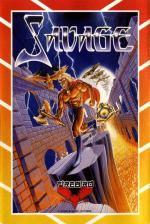 Women! Why do they get themselves captured and locked up by evil megalomaniacs? Because they've got huge violent boyfriends who'd get bored if they didn't, that's why! Miles "Me? Sexist?" Guttery shealths his mighty weapon and searches for distressed maidens...

Savage is a typically average hunky fantasy-warrior type Muscles in all the right places, but mostly between his ears! His woman's been captured by a particularly nasty man and is now held prisoner in his castle. Being the sentimental so-and-so old Say inevitably is, he sets out to rescue her. It must be love! To make things doubly difficult Say himself has been caught and locked up. so his first task is to escape from the castle dungeons. Easier said than done!

The dank corridors are home to hundreds of nasty little creatures: Bats, little dragons, flying insects, all with one aim in their minuscule minds - to make our hero's pants resemble a sewage recycling plant! Occasionally more formidable enemies appear who, when defeated, drop better weapons to aid Say in his escape. The nearer he gets to freedom the more fraught the situation becomes. And as well as avoiding or killing the nestles there are bottomless pas and pools of tire which must be negotiated.

Once out of the castle, Savage does what any self-respecting super hero would do. He demonstrates a super sense of self preservation and legs it. Maybe he's not not so dozy after all! This leads on to level two. where were presented with a barbarians-eye view of the action as the man himself runs (at an astonishing speed) from the castle, dodging strange monoliths and shooting the odd baddie. This bit owes more than a little to the age-old Space Harrier but without the sprite (or the playability!).

Having finally reached safety, Say realises his mistake. He's lust escaped from the very castle in which his gidy's being held! Fortunately he then discovers he has a remarkable aptitude for E.S.P. Not wanting to go through all that hassle again he takes control of the mind of a passing eagle and guides it back to the castle to rescue the fair maiden. What a wuss, eh? So it's on to level three, where you guide the eagle through the traps and nestles before locating the girl.

All three game styles have been seen before. Level Two's basically a 2D Space Harrier, level Three plays like Airwolf, and the runnyishooty formula of level One's been done countless times!

Difficulty-wise the game's pretty hard, making for more lastability in the long run but leading to frustration for the first few plays. Having said that, I found myself playing again and again to try and get just that little bit further. Graphics are reasonable throughout, but the sound is excellent - the intro track has to be heard to be believed!

For a measly three smackers you can't go far wrong with Savage. Basically you're getting three games in one levels One and Three are good, and though level Two looks a wee bit primitive, it still has that 'just one more go' appeal.

Three decent (though not outstanding) sections put together to make one very worthy title. At this price, Savage shouldn't be missed!

Hookability 88%
Hold on, let's have another go first

Lastability 84%
Lots of variety, and challenging too

Three decent (though not outstanding) sections put together to make one very worthy title... Savage shouldn't be missed!