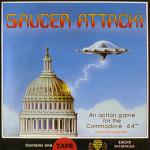 For some mysterious and unexplained reason aliens in flying saucers have decided to invade Earth - they've probably been watching the new series of V. Deciding that Washington DC is the best place to achieve their aim, they fly around destroying famous landmarks in a fit of extraterrestrial vandalism. Based in a bunker on the outskirts of this famous city, it's your job to send the aliens back from whence they came. Your armament is an energy gun, with the limitation of only being able to have one shot in the air at any time.

Saucer Attack from Ariolasoft is straightforward alien zap. You control your energy gun via the joystick. By moving the cross hair sight around the screen, you can let loose an energy ball as soon as your sights are lined up. The screen depicts the view of a bunker looking out across Washington with all the familiar landmarks visible. The object of the game is to repel the invaders and you can achieve this by scoring 150 points. Once you've done that, you get a crack it the mothership. The invaders need to reach only 50 points to win the game. For every three seconds they gain a point and also when they manage to destroy any of the major landmarks, such as Washington's Needle, they receive an extra 6 points.

Different tactics are needed depending on the saucers' movement patterns. If a ship is moving horizontally, only when you fire will it remain stationary. If the aliens are moving vertically at all they keep moving regardless. For hitting a moving saucer you gain bonus points. Every now and again one of the space ships attempts a landing and if it succeeds then it's goodnight Washington. When this happens a message flashes in the status area at the bottom of the screen.

There are three phases of attack, each one starting every time you score 50 points. The waves take place in daytime, evening and night with the graphics changing accordingly. Having thwarted the invaders, it's off into space to confront the mother ship. Flying through a starfield, the mother ship flies back and forth in front of you. The place you need to hit is the command module at the top. If you miss it, yet hit some other part of the ship, then it loses some shielding. The amount of ammo you've got left on this stage depends on how well you did in the previous stage. Kill the mothership and the game's finished.

This suffers from the 'fab graphics, shame about the game' syndrome. Washington is shown in the sort of detail which has only been seen before on the arcade game Bomb Jack. The sprites are really crisp and well drawn too. The only trouble is that the gameplay is really boring, being a naff version of Missile Command and it's very easy (two goes to complete)! Perhaps it would have been better at £1.99 than £7.95?

Saucer Attack looks brilliant. The graphics are amazing and the animation superb. The only trouble is that there isn't very much of a game there. Even JR managed to complete it after three half-hearted attempts. I must admit that there are some difficult factors involved. The program sometimes gets a mite confused as to whether you've blown up a saucer or not. More then once I launched an energy globe that smacked right in the middle of one of the alien invaders, only to have the program totally ignore my destructive talents (Oh yeah, any excuse - JR). Also the inability to have more than one missile in air at once made the going slow. The scoring system is a bit awkward - the instructions say that the saucers gain a point every three seconds which is fair enough, but the points are only added into the saucers' score once you've fired a shot. The atmosphere is really strange, it feels like you're acting out a naff fifties sci-fi movie. Overall pretty bad, I'm afraid despite the wonderful graphics there's just too little gameplay for Saucer Attack to make it, except as a reasonably priced budget game.

On viewing Saucer Attack for the first time I thought I was in for something special, since the background looks so stunning. Unfortunately this turns out to be misleading as the game is weaker than the unusual but sparse sound effects, with little to do other than blast two spaceships. This becomes incredibly boring after only a few games and quite honestly, I feel there's little more to say on the matter.

Presentation 51%
Title screen and his-score feature but no options.

Graphics 78%
Incredible backdrop, neat sprites, not much else.

Hookability 61%
Enough interest for a couple of games...

Value For Money 28%
Little gameplay offered for the price.