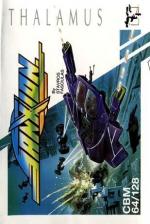 To survive, a new company needs an early taste of success. Is Thalamus heading in the right direction?

Thalamus is a new software house and, judging by their first game, they will be with you for some time to come. They have wisely chosen the highly popular (and lucrative) shoot-'em-up format but have added the essential sophisticated graphics which today's market demands.

The packaging of this game deserves special mention because I haven't seen such a case of verbal diarrhoea for a long time. The storyline basically says that the Russians and Americans have been united as a result of an alien attack. Between them they have initiated Operation Sanxion which means that advanced interceptors will fend off alien insurgents wherever they may appear. Reading between the many lines this means go out there and kill kill *kill*!

At all times the screen is divided in a 1:2 horizontal split. The top third of the screen shows a plan view of the fighters run with the larger section showing a side-on view. The scale of the two parscreens differs so that a slightly larger area is covered by the upper screen.

If I was heartless enough I'd say that Sanxion was a cross between Scramble and Defender (would I be so cruel?). In many ways the game does not stretch the boundaries of shoot-'em-up gameplay but one undeniable feature is its unfairing addictiveness.

The high speed pursuit vehicle starts off at one of the many ReGen stations which mark the beginning and end of each evel. Watching the ship rise majestically from its landing pad and hearing it hum up to speed is an audio-visual treat but there's no time to stand and stare. No sooner are you airborne than the aliens are upon you.

The waves of enemy craft come in a variety of forms and attack from both front and rear. Apart from the ships themselves there are also invulnerable aerial mines to be avoided. The faster you go, the fewer the alien ships you'll encounter before the next ReGen station and the greater the bonus at the end. The price you pay is that oncoming ships whizz past before you see them coming.

The first wave of aliens tend to fly in groups ahead of you with just the occasional formation flying head-on. Later formations include snakey trains of crafts which are easier to despatch if you take out the leading ship first, lone bombers which fill the air with mines that zigzag their way across the screen and whirling dervishes which pirouette ferociously at high speed.

Some of the ReGen stations have extremely inhospitable approaches. Security barriers span the path of the vehicle and you are forced into a top speed slalom which you must learn by the try and try again technique. If you still have time left at the end of your run a nice fat bonus is claimed and a further advance can be gained in the following screen.

Against a multi-coloured background of vertical bars, chains of bonus tokens traverse the screen from all directions. Depending on the type of token, you must shoot, collide or pick-up as many as possible to increase your score. Should you succeed in hitting a pre-determined number of these tokens an extra 1,000 points are awarded.

After you have successfully negotiated your way to ten ReGen stations you are promoted to Sanxion Class I and allowed to do night duty (call that promotion?).

The game was written by Stavros Fasoulas but the music is that of Rob Hubbard, the North East's answer to Jean Michel Jarre. As the game loads the music is funky and very much a 'Hubbard' creation. But the Geordie Genius really outdoes himself with a superb rendition of Serge Prokofiev's Romeo and Juliet which plays over the title screen and high score table.

I was pleased to see that old Serge P. gets a composer credit on the sleeve notes, a practice which I would like to see adopted by everyone. If anything can bring Classical gems to the masses, this is the way to do it.

Sanxion is well worth its full price mark up, it's certainly grabbed the NTP's (non-technical people) up at here at the office. Thalamus makes little secret of their links with the Newsfield publishing house an it is not surprising that US Gold are acting as distributor. The Midland Mafia strikes again!

The best advice I can give is to finish reading Computer Gamer and then dash out and buy a copy of the game at your earliest opportunity.

The best advice I can give is to dash out and buy a copy of the game at your earliest opportunity.