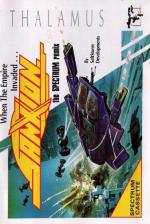 Cor, this has been a while coming, hasn't it. I remember a while back when it appeared on the C'mm*d*r* 64. What a game it was. Fast smoothly animated sprites and stacks and stacks of playability. Now, after many promises, Sanxion - The Spectrum Remix has arrived, and by remix, there are a few remixes. A few changes have been made.

The objective: Fly through the eight levels from left to right blasting all the aliens that appear. You have a time limit, but this only affects the size of the bonus, if any. that you get at the end of the level.

The screen is split into three windows. The bottom one, measuring up to just under half the screen. This is the first of many problems. The middle window is the status window that shows the score, bonus, etc. The top window contains the scanner which is a top view of the game and allows you to see aliens before they appear in the main playing area.

Now, I mentioned there was a problem, and I wasn't lying. The graphics are quite large, and so movement is restricted. This is already affecting the gameplay. Now, let's mention the collision detection. I feat that the masking on the sprites may be a little over generous. Bullets have about a six-pixel leaway on either side of the ship, which means that steering your way through anything more than one bullet becomes impossible. Another problem caused by the collision detection comes to light right from wave one. The first wave consist of a string of five aliens that altogether span the entire height of the screen. Obviously one of them has to be shot out so that you can get past, being as they are the same size as you. But no, I was lying, and you all fell for it hook line and sinker. You actually have to shoot out two. See what I mean.

Another thing that's missing is the adjustable speed. On the 64 version. the further right you moved your man on screen, the faster the screen scrolled. It's these little missing details that spoil a really good conversion.

A monochrome screen display and static sprites make it look a very dull game, and sadly I have to admit that the way it looks doesn't really come up to much in my estimation as a Spectrum SEU.