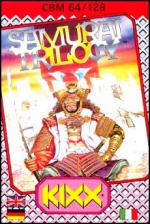 This old Gremlin martial arts effort earned a massive 29% back in Issue 27, so I wasn't expecting much - but I was surprised. Surprised, that is, that it got such a high rating!

The game sounds great on paper: you can fight using three different (well, that's what it says in the inlay!) combat techniques, chose training routines, and make tactical decisions between each round of the fight (allocating five points to offensive/defensive skill, speed, stamina, or strength). By fighting various opponents you can improve your skills in a bid to become a Samurai, and can even your character to tape.

So what's the problem? Well, basically, it's the pathetic "beat-'em-up" gameplay. No matter which discipline you're fighting in, you only get to choose from half a dozen possible moves.

And unless you switch off the grating oriental music in favour of 'clicking' FX, you can't even tell if you're hitting your opponent - the only time anyone gets knocked down (i.e. turns into a crumpled blob on the ground) is when he's completely defeated. Otherwise, the two fighters just shuffle around, flinging assorted arms and legs in the air, apparently performing some strange oriental dance instead of trying to beat each other up!

We at Zzap! are great fans of oriental fare (witness the brilliant IK+) but this is one Chinese dish even the dustmen refused to take away!

Two fighters that just shuffle around, flinging assorted arms and legs in the air, apparently performing some strange oriental dance instead of trying to beat each other up.