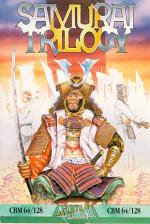 Deep in the heart of China lives a group of elite Warlords, masters of armed and unarmed combat. Every year they select a small number of students to join their ranks, but each one has to prove himself worthy of the position by showing proficiency in the three fighting arts: Kendo, Karate and Samurai.

This year you have been skilled enough to merit a place in the training program, and now have your chance to impress the warriors by beating the expert opponents they pit against you. The Samurai Trilogy is spread across four independently loaded sections. Initially, the expansive credits and title screen options appear, offering a selection of languages and a choice of skill practices.

Next comes the chance to load a previously saved game, and finally one of the three fighting skills is chosen.

Another series of options is presented prior to combat. One opponent is chosen from a list of ten, with his background story displayed. Next comes a fight strategy selection, where a choice is made between Skill, Speed, Stamina and Strength. The final choice relates to pre-fight training - five points are allocated to the four fight strategies for both attack and defence.

At all three skill levels the player is capable of sixteen different moves, accessed by combinations of joystick movements in conjunction with presses of the fire button.

The bottom of the screen contains five diminishing bars, four representing the fighters' inner and outer strengths, and the fifth acting as a timer. The objective is to hit your opponent enough times to reduce his bar to a fatal zero. If this isn't done within the allotted time the bout is judged on points, with the highest scorer declared the winner.

Having won a fight, the player chooses another opponent and new options are chosen. The current situation can also be saved for future use if so desired. When enough opponents have been defeated the player returns to the title screen and another skill is loaded.

As fighting games go, this is one of the worst.

The multi-load is a greedy time consumer, and having to endure the options time and time again is a chore. I never felt any feeling of excitement, mostly due to the unrealistic and jerky sprite movements and the over-complicated and illogical use of the joystick.

Another detraction is that there never seems to be any contact between the fighters - they just float past one another, even when contact is made. The strength bar may shrink a bit, but there's no satisfying thud or opponent reaction as fist hits flesh - something that makes a beat-'em-up worth playing.

This is more like a quiz composed of a series of multiple choice questions than a fighting game - there are so many superfluous options. What's even more annoying though, is the fact that when the almost eternal selection of options has been completed, the actual game is awkward, boring and mostly unplayable.

The backdrops have potential, but the characters are too effeminate and move badly. It never feels like you're involved in combat, just an elaborate oriental dance. Perhaps the programmers got carried away with the glossy presentation, and ran out of room for a decent fighting game - the potential was certainly there, especially with the Kendo and Samurai sections.

Yet another combat game - and this one is awful. Considering the effort that has obviously gone into Samurai Trilogy, the final product is hardly worth it. It's ill-conceived and badly implemented, being simplistic in concept and still unnecessarily complex.

The constant interruption of the tactical decision sections are very annoying and hardly seem to make any difference to the outcome of a battle, which, in many cases, can be won by repeating the same manoeuvre over and over again.

Whoever designed the sprites has little concept of movement (or anatomy for that matter), and the backdrops are equally bad.

Presentation 51%
The laborious multi-load and over-complicated options are difficult and mostly unnecessary.

Graphics 32%
Badly animated and unrealistic sprites fight across a series of unprofessional backdrops.

Hookability 37%
The awkward controls, multi-load and general presentation are off-putting from the start.

Lastability 28%
What little variety and action there is, is completely ruined by the execution.

Value For Money 25%
Grossly overpriced as it lacks any entertaining qualities and is cumbersome to use.

Badly animated and unrealistic sprites fight across a series of unprofessional backdrops. In all, a very poor fighting game which offers little action and variety.