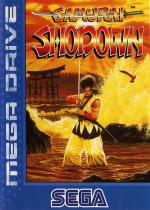 It was a time of heroes... Yep, these and countless other martial arts movie cliches are continued in Sega's conversion of SNK's Samurai Shodown coin-op. In addition to slow-motion fight scenes, OTT opponents, and a dreadful soundtrack, Shodown also manages to cram in all manner of deadly weapons and pets. Just for the kiddies, like.

Basically, Samurai Shodown is Street Fighter with swords. And pets. Within a strict time limit, the main aim is to reduce your foe to the size of a dozen stock cubes using whatever special moves you have mastered. If not, he'll do it to you and you'll end up looking like a pile of mince. And that's it. Expect a sequel set in the months between June and August, though. It's called "Summery Shodown". Titter.

Slice your opponents into sushi. Or kick them to death. Whatever.

Samurai Shodown's eleven fighters are a motley bunch, each of whom has differing skills. In addition to the usual Ninjas, mutants and fat blokes, there's a guy called Galford who has a dog which mucks in and bites people (It's called Poppy, so that must mean he has "Poppy Power!". Suit yourself) whilst Nakoruko has winged help in the shape of an eagle. Similarly, mucho swords, knives and throwing stars are in order as the player traverses the world, duffing people up, avoiding bombs lobbed by passers-by, and chopping up the straw dollies which appear in the bonus round. Oh yeah, and there's also this cool bit where the two fighters lock weapons and whoever taps the attack button the fastest knocks the other's weapon out of their hands.

How many times have you played a beat-'em-up, only to find you can clock it by repeating a set process? Samurai Shodown attempts to thwart any such actions with the addition of a 'Rage' bar. Every time your opponent concedes silly hits or damage from a set pattern, a bar at the bottom of the screen begins to grow.

When it is completely full, the niggled character flushes bright red and becomes more aggressive than before - similarly, their hits are also twice as harmful than before. Still, you know what happens when you tease someone too much...

I don't care much for Neo Geo games, which are usually 99MEGs of graphcs and 1MEG of gameplay, but I didn't find Samurai Shodown too bad compared with comparable Megadrive beat-'em-ups. The graphics are lovely, despite losing the scaling, and some of the ideas like the vicious pets almost verge on the original.

My main complaint is the sluggishness of the characters. If the game has been faster, this comment could have been quite different, but as it stands Samurai Shodown is not an A-grade contender.

The original Neo Geo version of this weighed in at a mightly 100MEG, so it was obvious a few odds and ends would be lost in the conversion to the Megadrive.

As such, the sprites are smaller, Earthquake is missing, and the zoom mode of the original is on the scrap heap.

Sadly most of the animation and speed of the Neo Geo game has gone too, leaving a very average beat-'em-up which will line up alongside Art Of Fighting and King Of The Monsters in the conversion route to obscurity.

Samurai Shodown is a fast-moving beat-'em-up which, whilst very derivative, has enough novelty value and playability to make it worth investing a few quid. In this conversion, though, the moves are sluggish and a little hit 'n miss and this makes the game a bit of a chore to play.

Basically, there is a lot of wasted potential here and I doubt it even die-hard fans of the coin-op will persevere with this.

Graphics 78%
P. Colourful sprites and backdrops, which are brilliant - until they move.
N. Sparse animation, and no real flow to the proceedings.

Sound 17%
N. The worst music. Period. No, really, the music in this is simply foul. The effects are crap too.

Playability 68%
P. A modicum of enjoyment to be gained from the special moves.
N. It's too hit 'n miss to be taken seriously.

Lastability 53%
N. Despite the wide range of fighters and locations, and the ten skill settings, this just isn't exciting enough and rarely proves addictive.

Value For Money 57%
N. There are better beat-'em-ups around. Have you ever heard of Mortal Kombat II?

Overall 61%
Not completely awful, but too flawed to recommend and a very average coin-op conversion.

Not completely awful, but too flawed to recommend and a very average coin-op conversion. Better beat-'em-ups like Mortal Kombat II are around.