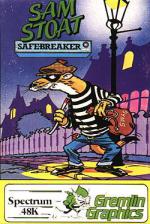 Gremlin Graphics, who brought us such cuddly friends as Monty Mole, Beaver Bob and Percy Pigeon, now presents Sam the felonious Stoat. Your task is to take Sam on his house-breaking sortie. You must find a bomb and a match with which to break into the safe, and then collect the diamond and leg it.

You move about the various rooms via a network of mouseholes. Each time you enter a rnousehole, you must negotiate a series of poles sticking out of some water. Use these as stepping stones, but since they have a habit of moving up and down, this is rather tricky. Since I haven't managed to complete this step, I can't comment on the point of this exercise. Each room is occupied by sundry nasties, as expected, which impede your progress. There are also trinkets to pick up. Somewhere in each house is a bottle of stoat reviver which enables you to complete the task in hand.

The graphics are to a good standard with the screen representing either a room, or part of a room. Animation is average. There are four houses with 20 rooms in each, which offers a fair variety. The instructions supplied with the game are poor, leaving a number of questions unanswered. The usual choice of keyboard and joystick interfaces are catered for.

Overall, rather a weak game which doesn't really compare with the state of the art software for the Spectrum and is of limited novelty.

Rather a weak game which doesn't really compare with the state-of-the-art software for the Spectrum and is of limited novelty.