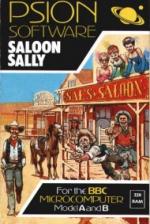 "Watch them cowboys, Ma'am!" - as you'll have to keep your wits about you if you don't want four hefty desperado's jumping on you.

In the depths of cowboy country, Sally's saloon is being torn about by some mad, bad, cowhands. So involved are they in bashing each other up that they forget about the stolen gold they've left lying around on the table tops.

In just retribution for the damage being caused, Sally slinks around the room collecting up the stolen gold. However, occasionally a cowboy catches up with Sally in the act of filching his loot and jumps on her in a mad frenzy. Poor Sal - she's only got four lives and she'll lose them if she's not careful.

Sally's one method of defending herself is by hurling tables and chairs at the baddies, which effectively puts them out of action for a while.

Once she has successfully picked up all the bags of gold you move onto a new screen where the layout of the tables changes.

An ever-present jingle plays throughout the game which at first is quite catchy but after about five minutes of play begin to pall. I found it very irritating that there was no on/off option for the sound. However, the sound is effective in that it resembles a honky-tonk piano such as those found in old westerns.

Saloon Sally is based on the original theme of Pengo, the arcade game, the idea has been successfully transferred from the Arctic to the wild west and is very addictive in its own right.

With keyboard control, the game is easy to master and is very playable as there is room for a certain amount of strategy. Crushing all four cowboys at once will earn bonus points and I found that it was possible to trap the odd cowboy by manoeuvring tables round him thus leaving one less nasty to contend with.

Saloon Sally is available from London-based Psion from the BBC Model A & B at £7.95.

Crushing all four cowboys at once will earn bonus points and I found that it was possible to trap the odd cowboy by manoeuvring tables round him thus leaving one less nasty to contend with.