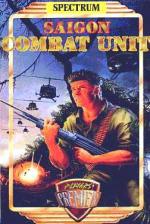 Kerboom! Aiee! Eat hot lead, slanty! Don't I seem to have written all this before? Yes! It was a few months ago when every film in the cinemas and game on the market seemed to be about Vietnam, just when you thought it was safe to go back to Phnom Phen, here's Saigon Combat Unit, which in a cheap and cheerful way seems to pack in a good deal more action than most of the others put together.

Here's the plot. The evil Viet Cong (hiss hiss, boo boo. I'm sure some of them are perfectly decent human beings achkchaloi) have destroyed the US Marines HQ, which, we're told, is exactly 32 miles north-east of Saigon. Why this figure is crucial I don't know, but the point is the Cong have captured your commanding officer, and you have to fight your way through hordes of the screaming devils to get him back.

The big surprise is that SCU has decent animation, plenty of colour, nice music and FX, and load's of non-stop shootin' . The horizontal scrolling isn't 100 percent smooth, but the action more than makes up for this: lines of Cong rush at you from left and right, and your trigger-finger soon wears out as you gun them down. You can leap from one level to another, crouch to avoid bullets, and shoot diagonally upwards and downwards to pick off enemies in the trees and in pits (which you must leap over). Then there are mines to avoid, jeeps which have to be taken out with grenades, and, goody goody, extra arms you can buy from your friendly local gun shop.

Snuffing a gook makes a coin appear: destroying a jeep brings a big bonus. Catching the dosh earns you enough ackers to stock up on killin' irons; the shop entrances appear at regular intervals, and entering one brings up an interactive display where you can spend your money on bigger guns, grenades, smart bombs and so forth. You can also purchase first aid kits to restore your flagging energy.

Make it through to the enemy base and you get a code word which allows you to load the second half of the game from the tape, and the fighting goes on. Just to help you out the code word is... Hah! You didn't think I'd give that away, did you?

There's nothing in SCU which hasn't been seen any number of times before, but it's very well put together and shouldn't be missed by any fan of tremendous violence.

Excellent "Bomb 'em back to the stone age!"-type fun.

Excellent 'Bomb 'em back to the stone age!'-type fun.