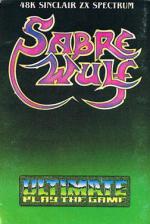 Ultimate seems to have gained a unique reputation among Spectrum owners.

Ever since the arrival of Jet Pac, Sinclair fans everywhere have rushed out to their computer shops to buy Ultimate games, turning them into top sellers.

After Jet Pac, including conversion for the Vic 20, came Atic Atac and it's still selling well.

However, nothing had been heard from Ultimate's Ashby HQ since Atic Atac was launched a few months ago. Everyone knew that they were working on a new program, and all agreed that it would probably be better than anything they'd done before.

Sabre Wulf is the result of all that waiting and was launched this month.

It's a graphic arcade adventure game, which is another way of saying that it's similar in style to Atic Atac. Sabre Wulf is one of those maze games where you move through an area, much bigger than the screen is capable of showing.

So the display scrolls in four directions, a whole screen at a time. If you disappear off one side of the display, it will be redrawn instantly to show your new position. If you go off the right hand side, you will be on the left of the new display.

Previous reviewers of Ultimate's software have usually ended their articles by saying that Ultimate have achieved as much detail in their graphics as the Spectrum is capable of.

Sabre Wulf goes to prove just how mistaken those reviewers, including myself, really were. I have never seen graphics of such high quality on a Spectrum as presented by Sabre Wulf.

When you load the game and have selected the initial options, you start on the first screen. This is remarkably similar to Atic Atac and I wondered at first whether this was just another version of an old game.

I happened to mention this to the manager of my local computer shop and he agreed with me. If people see this game for the first time while they happen to be standing at the computer counter in WHSmith, he said, then they may see it load, think that it's nothing new and walk away without looking further.

The game appears to be set in a jungle. I assume that it is, although the word jungle is never actually mentioned in the cryptic instructions which come with the cassette.

Your task, it appears, is to free yourself from this strange place in which you have become lost. To do this, you must explore all the area around you. You can get some clues as to your ultimate (sorry!) goal by reading the strange rhyme on the instruction card. It goes like this:

Thy path is long so tread with care
Beware the Wulf and pass his lair.

Danger threatens all around
so take ye from this hidden mound
to free thee from this sunken gate
by way of cave or meet thy fate.

Pass the keeper wrought with hate
to gain an entrance to the gate.

The pieces lost must thee amass
for if no charm then none shall pass.

So the idea is to collect the four pieces of a charm (another word for amulet) which are hidden around the area of play. We managed to find one of them and my top score currently stands at around 17 per cent.

By now, you're probably wondering why the game's so hard. Wandering round a maze isn't really that difficult. But you're not alone in your quest. There's a strange variety of other creatures in that there jungle. Some are helpful and will give you extra points or lives, while some will cause your instant death.

Your character is that of a small explorer. You are initially coloured white, but certain events will have a drastic effect on your colour. If you turn red for a few moments, then you are immune to all enemies and you can wander to your heart's content without fear of being splatted. There's one thing better than being red, though, and that's being blue. When you're blue, not only are you immune to torture but you also travel at twice the speed of your red counterpart.

Other animals which you'll encounter on your safari are tarantulas, scorpions, snakes, fruit bats and more. There's also a strange, vicious creature called the Sabre Wulf. Which is lucky, really, otherwise they wouldn't know what to call the game.

Your weapon against the cruel world of nature is a sword. Pressing the Fire button on the joystick will activate your sword and you have a high chance of surviving. You have to hit an animal straight on to be in with a chance of killing it though, so timing those corners is crucial.

But it's the graphics which make up the playing screen that really make the game worth every penny. The detail the animals themselves and in their movement continue to make Ultimate number one among the Spectrum software houses.

If you feel that you must get hold of your own copy, then you should find one in your local computer shop somewhere. It's also available in WHSmith.

Sabre Wulf costs £9.95 which is pricier than most games. Ultimate claims that this is necessary because of the vast amount of time it took to develop Sabre Wulf. I can believe it.

The best part of Sabre Wulf? The graphics which make up the playing screen. They really make the game worth every penny.