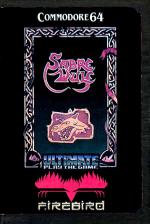 Sabre Wulf is one of the all-time classic Spectrum games originally from Ultimate, and now, after a year's wait, it has finally been converted to the Commodore.

The game is a 2D maze arcade adventure where the object is to enter a jungle, find the four separate pieces of the ACG (Ashby Computers & Graphics - or Ultimate to you) Sabre Wulf amulet and escape. The jungle is made up from 256 screens which 'flick' as you go from one location to another. Thy majority of these being maze-like paths that have to be rigorously followed. Most paths will lead you either to a dead end, usually a swamp of pond, or to a clearing. If you find the correct path though, it'll lead you to the place of the Guardian where you'll be able to escape if you have all four amulet pieces. The pieces are always located in four of the 16 clearings, so it's advisable to head towards these rather than follow paths blindly.

No jungle is complete without its animals, and this one is no exception. There are plenty of deadly jungle animals lurking in the foliage, must of which can he killed with your sword. These animals range from spiders and fleas to porcupines and gibbons.

There are some creatures living in the jungle, however, that can't be killed with your sabre. These are the most deadly and usually catch you by surprise by hiding off screen, so as soon as you enter a new one, they'll get you. These rotters include the tribesmen, hippos, rhinos and the Sabre Wulf himself, who runs after you and tries to pounce and maul you to death.

Most of the jungle fauna forms a border to the path and can't be entered, but one plant, the orchid, does grow on the path itself. These come in five species - red, blue, yellow, purple and white. They are all harmless and do in fact aid you during the game if you step on them when they're in full bloom.

Red, blue and purple ones make you invulnerable to the touch of any animal, although blue speeds you up and purple reverses the controls. Yellow orchids are slightly poisonous, one touch and you'll have to sit down for a little while to recover. White ones are an antidote to any other orchid.

Dotted about the maze are different objects that you can pick up to add points to your score; these being things like sabres, rings and packets. There are also extra lives in the form of voodoo dollies that provide much needed extra gameplay.

Almost every Ultimate game released has caused a stir, either because they are so fab, or because (despite being virtually state-of-the-art) they are so similar to the previous release that people feel aggrieved. But whatever, they nave never been ignored. Of course, most of them have appeared on the Spectrum, and when Sabre Wulf came out it was accused of being an Atic Atac with trees. Actually, I think it's an easier game than Atic Atac. What's odd is that anyone has released it now on the C64, when Ultimate themselves have done much better-looking stuff on the C64. I can see Firebird's point in a way, but perhaps Sabre Wulf is just too dated now in its original form - it could have done with a complete revamp.

Having seen and played Sabre Wulf on the Spectrum some considerable time ago, I wondered whether it was worth Firebird's time in releasing it. There are plenty of new style adventures on the C64, and the format of the game is rather rather crusty, especially when compared with some of Ultimate's new Commodore stuff. The graphics on this game are very disappointing, with really flickery sprites and no improvements on the original Spectrum graphics. The game itself isn't too much fun to play either - most of the screens all look the same, and once solved (rather easy), there's no real compulsion to go back to it.

I wasn't a great fan of the original game when it first appeared around a year ago on the Spectrum (I've always preferred Atic Atac). The Commodore version has been long overdue in arriving, and now I feel it's just a case of too little, too late. The graphics and sound are as dated as the gameplay and I can't help thinking that this is one game that should have either been released earlier this year or put out at a budget price. Maybe improved graphics and sound would have helped... but not much.

Presentation 61%
One or two players and little else.

Value For Money 39%
Far too expensive for a year old Spectrum game.

Overall 40%
Would've been nice eight months ago, but now...

Highly disappointing and far too expensive for a year old Spectrum game. Would've been nice eight months ago.