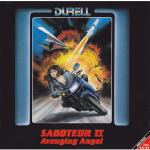 You take the role of the Ninja's beautiful sister. Your task is to avenge his death by getting into the massive complex that holds the dictator's missile. There you must find enough bits of punched tape, hidden in supply boxes, to redirect the missile.

You start off gliding over the complex in a one-woman hang-glider. You are too high above the complex to know exactly where you will land, but low enough not to die when you jump from it. Huge android guards and lethal pumas patrol the complex. As in Saboteur 1, you can kill these with unarmed combat kicking and punching - or with weapons found in the supply boxes.

The complex is like a vast hill, with lots of passages mazing inside it. Quite mappable. The lower passages pose greater obstacles, such as vampire bats and flooded passages which you can swim.

After six or seven games you should be able to find your way around the complex fairly well, though you still have much to explore. It is not difficult to find the missile, but you cannot get inside the silo which contains it.

I like this game very much. At first the android guards killed me too quickly, but I soon got quite skilled at killing them. I found the motorbike once, but was unfortunately dead at the time due to my sudden stop after falling down a lift shaft. A lot to play, and many hours of enjoyment.

Can't say the graphics have improved much from the original, which is unfortunate news for green-screen owners. The gameplay is better than its predecessor, but I didn't find it inspiring. It's an excellent game for those who like a lot of running around and mapping. Good to see a female hero for a change, getting her own back with a few well-placed kicks.

Some screens with blue and black are extremely hard to see.

Overall 74%
P. A good sequel.
P. Durell is still doing its special offers with the game.

An excellent game for those who like a lot of running around and mapping.