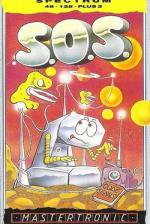 This ain't that bad a game, you know! You are in control of Sydney, a likeable if lost, robot. There he was, flying along, when whaddayaknow? The darn plane crashed and dumped him unceremoniously into who knows where. All Sydney has to do to get out is find the radio that was in his plane and switch it on. There you go, simple isn't it? Once the radio is on, sending out its SOS message (hence the title), little Syd can be collected and returned to base. This means he'll save Geoff Foley's skin (strange idea, the author writing himself into his game as a side character) and large numbers of blue drinking vouchers for the Government!

The display is of the three quarter view, or isometric (technical term for on the skew) type and you use the joystick to manoeuvre Syd around. It's almost an arcade adventure style gameplay, in that you have to gather various objects and use them to manipulate other objects. For example, using a disk helps you mess up computers which block the way. So, you have to find and collect the disk first. The bottom of the screen shows the items you've gathered plus the amount of energy remaining, current score, and the number of lives left.

It is, plainly put, a good game and well worth the money spent. The gameplay is sufficiently tricky to keep you at it, and the graphics are funny, as suits the tone of the game. It strikes me as the sort of game that if the box had been bigger, and the scenario around it more convoluted, it could easily pass for a full price game.