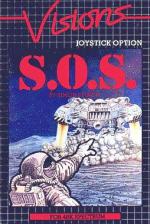 Such is the foolishness of space travellers.

I mean, there I was peacefully enjoying myself after a mining expedition in deep space when suddenly a distress call sounded on the main computer. The scanners read that it was coming from what was thought to be a lifeless lump of rock.

Being an inquisitive sort of human, I decided to investigate. I put the ship into geostationary (I don't know what it means, but it sounds good) orbit. I hopped into the landing craft and thrust out into the planet's atmosphere.

The idea is to fly down from your spacecraft to the numerous landing pads on the planet's surface. Sounds easy? Well, there's one small problem and that's the numerous inhabitants of the planet who are not too keen on you invading their territory. They throw themselves at you in wave after wave.

These aliens have been painstakingly drawn in tremendous detail with superb movement. Not only do the various rocks and other weird 'things' move across the screen but they also spin internally. Don't get distracted though - you've got to do some fast blasting!

Sound is poor, being almost non-existent, with a faint hum when using the 'thrust' button. The explosion effects are marvellous, however.

An average game with good graphics, although I feel the depiction of the rescued man could have been improved greatly. Surely he should run up and shake your hand after all you've done for him?

A mysterious title and excellent loading screen belie the fact that this is really nothing more than a lacklustre version of Lunar Lander.

Graphically, it is quite pretty and the movement is fairly smooth, but why on earth is your lander launched from what appears to be a cat's head? Soundwise it is the same - adequate but uninspired.

However, my biggest gripe with this game is the way each wave of obstacles is identical, right down to the way they move.

Still, Lunar Lander fanatics might enjoy it. As for me, I could find much better things to do with a fiver. Like Origami.

All levels are fairly similar and this detracts somewhat from the overall playability. It's extremely difficult (try getting back to the mothership from the middle plateau) but at the same time great fun.

Will this sell in huge quantities? I doubt it but if you enjoy a game that mixes skill with fast action this should interest you.

My biggest gripe with this game is the way each wave of obstacles is identical, right down to the way they move.