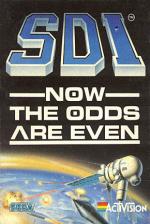 Whenever anyone mentions SDI in the Zzap! offices, referring to it as the "Star Wars" programme, Maff creases up thinking of Ronald Reagan dressing up in his Jedi suit and wielding his light sabre to ward off the missiles. What a sad sense of humour that boy has. Everyone news that the Strategic Defense Initiative involves computer-controlled satellites shooting the missiles with on-board lasers... don't they?

In this arcade conversion from the Sega arcade game, you play the part of one of the computers, blasting any invading metallic stuff out of the sky with your satellite mounted laser - Vooom! Like that, see. No? Oh well. You fly your satellite around the screen unleashing your laser by way of a floating cursor, controlled by holding down the fire button.

Extra points are awarded for extra skilful play and if you shoot perfectly... whoar! Bonus galore!

Having never played the arcade game, I didn't really know what to expect from this conversion. It's not the most interesting game in the world, but to be quite honest it's not bad.

There isn't really a great deal to do except shoot the... er... wotsit out of things but it's quite fun blasting everything that moves.

The graphics are OK, with some nice touches (such as the shuttle), and I'm told it's quite close to the original. However, fans of the coin-op shouldn't be too disappointed since it's still a playable game, even if it's not "just like the real thing".

I've only played this a couple of times in the arcades, but it's still enough to see that Activision have done a reasonable job of converting it to the C64, even down to the dancing duck if you get a 'perfect' rating.

The gameplay's all right, if a mite repetitive, and is portrayed by some pleasant spacey graphics. The sound on the other hand is pretty naff, consisting of a few basic effects and a dodgy theme tune.

Still, worth checking out if you're into the coin-op.

Presentation 79%
Some good options and many of the arcade features, but the intermissions are a bit 'flat'.

Graphics 72%
Nice sprites and shading marred by a lack of variety.

Overall 64%
A good conversion of a rather weak arcade machine.

A good conversion of a rather weak arcade machine.